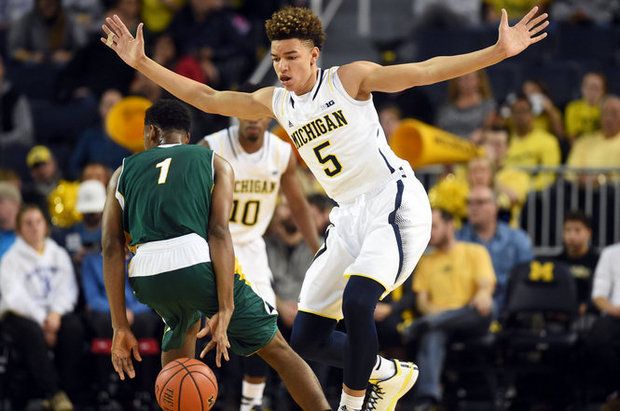 The San Antonio Spurs are currently up 2-0 in their first round series with the Memphis Grizzlies. While they haven’t won the series, the likelihood is looking more like they will and that means it’s another step to getting a low first-round NBA Draft pick. This is undoubtedly why you’re back and reading this article. So that you can find out who you should be obsessing over on YouTube because the Spurs might be looking at them for late in the first or second round.

This week’s prospect to watch is Michigan forward D.J. Wilson who surprisingly declared for the NBA Draft in one of its deepest classes in recent memory. He did have a breakout season by bringing his scoring average up from 2.7 points a game to 11 and his blocks from 0.4 to 1.5 a game. However, he might be the diamond in the rough that the Spurs like to draft late. Here are his stats:

You would have liked to see more production out of the junior this past season, but he has declared for the NBA Draft without signing an agent so he could end up going back to school if he doesn’t like how he performs at the NBA Combine. For now, he’s in the draft though and could be a nice second round steal. He’s still a little raw, but that just means the Spurs could instill good values and habits before he really develops any bad ones.

Wilson will have to bulk up in order to play against bigger forwards in the NBA, but he does have the athleticism to run around with the small-ball forwards and centers. He can’t really create his own shot right now, but that can be fixed learning under guys like Pau Gasol and LaMarcus Aldridge should the team draft him. His rebounding numbers need to improve considering how athletic and big he is, so that might be an issue going forward as well.