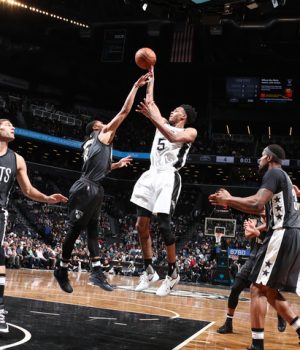 With the San Antonio Spurs’ regular season beginning Wednesday against the Minnesota Timberwolves, let’s take a look at which second year player is poised to make the biggest impact this coming season?

All in their second year of NBA basketball, Dejounte Murray, Bryn Forbes, and Davis Bertans will all be expected to show some sort of improvement from last year’s campaign. However, the most likely impact will stem from Murray.

Over the course of last season, Murray went from playing in the Developmental league to starting in the NBA Western Conference Finals. Many expected him to be eaten alive under such high pressure, but filling in for the injured Tony Parker, Murray rose to the challenge.

Murray first showed the public what he was made of in the middle of the regular season when Parker sustained an ankle injury. Murray started at the point in place of Parker, and he put up 24 points in 34 minutes.

Not only has Murray improved offensively, but the 6’5” point guard has matured into a defensive asset for the silver and black as well. During the postseason last year, Murray averaged a total of 0.1 BPG. This average greatly improved in the preseason as Murray ended with 1.8 BPG.

Murray’s experience filling in for Parker gives him the upper hand when it comes to continuing to grow and being trusted with in-game opportunities. While Forbes had an eventful preseason, lack of starting experience might affect his minutes.

Furthermore, Murray’s speed, size, and playmaking ability will greatly influence the amount of time he’s on the court compared to Forbes, who is more of a scorer than playmaker.

As the regular season begins, not only can it be expected to look toward Murray as a starting guard in Parker’s absence, but expect an overall big impact from this second year player.