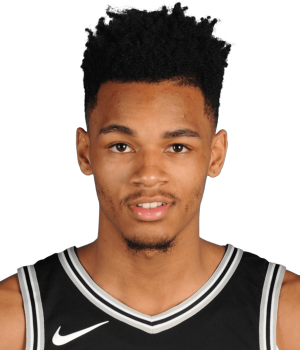 While the Spurs did build a 13-point lead at one time in the game, their core players were still on a minute’s restriction. By the time the fourth quarter arrived, most of the Spurs’ starters were done for the night while the Magic kept their starting unit on the floor. The Magic starters like Simmons and Aaron Gordon (27 points, 11 rebounds) were able to make the full comeback for Orlando.

Here were three standout players for San Antonio in the loss to Orlando.

Murray was more aggressive on the offensive end in terms of looking for his shot Tuesday, as he and LaMarcus Aldridge both finished with 11 shot attempts. Any time Murray penetrated the lane and a defender tried to contest his shot, he’d seek his floater. Murray continually found a way to get into the teeth of the defense to find open shooters or cutters on his way to six assists. It’s not just about scoring and passing for Murray that allow him to earn minutes on the floor, but it’s also his length that allows him to be a factor on the glass and on defense, where he can block players shots or at the very least make it difficult for opponents to shoot over him.

Through four preseason games Murray has been the Spurs’ starting point guard and next week when the season opens against the Minnesota Timberwolves, that will likely be his job until Tony Parker comes back sometime in late November or December.

Gay scored his most points in the preseason as a Spur as he showed a variety of his offensive skills in being able to cut off the ball, post-up, spot-up from outside, handle the ball in the pick-and-roll and off-the-dribble, and draw fouls for free throws. Before the season began, several Spurs players commented on how Gay will help the rebounding department, and he showed that ability with the seven boards on the glass with his height and length.

As he’s been doing for most of the preseason, Aldridge once again showed that when the team goes to him early, he can find his rhythm quickly out of the post-up, pick-and-pop or spot-up game. He scored his first 11 points in the first quarter by taking advantage of the Magic lack of size in the frontcourt by posting Gordon. Aldridge didn’t play in the fourth, but with him being the lone focal point until Kawhi Leonard returns, his teammates know where to find him so he can get to work on offense.

“He’s played really loose,” said Spurs Head Coach Gregg Popovich of Aldridge in the preseason. “Especially on offense, he looks real comfortable. He’s getting the ball in good positions and has done a fine job being a real stalwart at the offensive end of the court. Just like last year, he’s working hard defensively. He’s having a really good beginning.”

Up Next: At Houston

The Spurs’ final preseason game will tip off Friday in Houston against the new-look Rockets who added Chris Paul over the summer. That game can be seen on TNT.