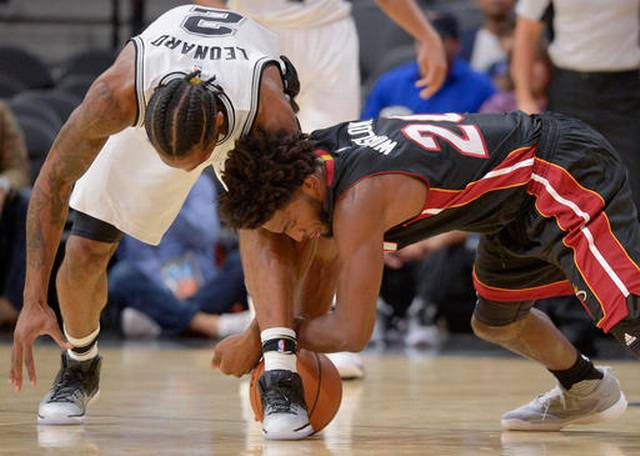 AT&T CENTER – On a night where completed passes were tough to make and the visiting team knocked down 11 three pointers, the San Antonio Spurs weren’t able to overcome a 23-point deficit Friday, as they fell to the Miami Heat 108-100. Since it was a preseason game, minutes were limited and different lineups and combinations were used through the 48 minutes, as the observations below provide a bit more clarity into some insights of the game.

LaMarcus Aldridge was the only member of the Spurs’ starting lineup who did not play Friday, as he was in Austin, Texas being inducted into the University of Texas’ Hall of Fame. With Aldridge out, Kyle Anderson started at the four alongside Tony Parker, Danny Green, Kawhi Leonard, and Pau Gasol. Early on in the first quarter, the Spurs looked like they were running very common sets out of their Motion Weak formation, but with different players initiating the action or different shots being developed out of the set. On some occasions, it was Gasol who received a post-up, while on others, it might have been a post-up for Anderson or pick-and-roll for Parker. One early problem the Spurs faced was completing passes to each other, and that lasted most of the night, as multiple players ended up turning the ball over and the team tallied 19 total turnovers.

With Anderson starting, the Spurs brought in a bench unit of Patty Mills, Manu Ginobili, Jonathon Simmons, David Lee and Dewayne Dedmon. But, even the bench had trouble running different sets and they too struggled in the turnover category.

In the second quarter, the Spurs put an interesting lineup on the floor as all four starters played some minutes in the game, but the sharp-shooting Davis Bertans played alongside them at the four. In the second quarter, Bertans took advantage of the attention his teammates drew, as he began knocking down open or lightly contested baskets. Bertans would go on to finish with seven points, as he was the team’s second leading scorer going into halftime.

In the third quarter, the Spurs went cold, as they did create open shots from the outside, but those shots rarely went in. The Heat defense can be credited with shrinking the paint as most layups and attacks at the rim were well contested for San Antonio. The Heat also did a good job with their drive-and-kick game on offense in the third quarter, as they moved the Spurs’ defense around by getting by the initial defender, collapsing more defenders inward, then passes would be kicked out until they found the hands of an open shooter. The Heat ended up making 11 of their 30 attempted threes Friday.

The second unit began and played a good chunk of the fourth quarter, and that was when Ginobili and Dedmon began to build some chemistry. Ginobili’s pick-and-roll game with Dedmon helped Dedmon get in perfect position to catch passes and draw fouls, while Ginobili also connected on an alley-oop with Dedmon in the open court on a fast break. Dedmon went on to finish with 11 points and seven free throw attempts in 17 minutes.

The latter part of the fourth quarter was filled with camp invites and end of rotation players like Nicolas Laprovittola, Bryn Forbes, Jonathon Simmons, Livio Jean-Charles and Joel Anthony. The backcourt of Laprovittola and Forbes were very active in the final quarter, as the duo scored 14 combined points. Laprovittola in particularly threw some nifty bounce passes in the half court on drives that didn’t get too much attention, but he did complete a between the legs pass through the defender on one specific possession.

Despite trailing by 23 and losing the game, Spurs Head Coach Gregg Popovich did see one particular aspect of the game he liked afterward.

“Maybe a little bit more willingness to pass,” said Popovich of his team. “Although I thought that the passes were poor in the sense of accuracy. It’s tough to get shots when the balls at your feet or to the side, or over your head, or that kind of thing. So I’m disappointed in that, but there’s a willingness to hit the open man.”

The Spurs are now 3-2 in the preaseason and they’ll have a week off before playing their final preseason game next Friday when they face the Houston Rockets. The Spurs will however have an open scrimmage Tuesday evening in the AT&T Center. Before the game, Popovich said he didn’t anticipate having to waive any of the training camp players just yet until after the final game is concluded next Friday.

Laprovittola, Forbes, Anthony, Patricio Garino and Ryan Arcidiacono are the five players fighting for the final roster spot. Garino, Acridiacono and Dejounte Murray all received DNPs (Did Not Play) in Friday’s loss to the Heat.