San Antonio Spurs head coach Gregg Popovich has gotten the reputation from Spurs fans that he doesn't usually play rookies, especially with a 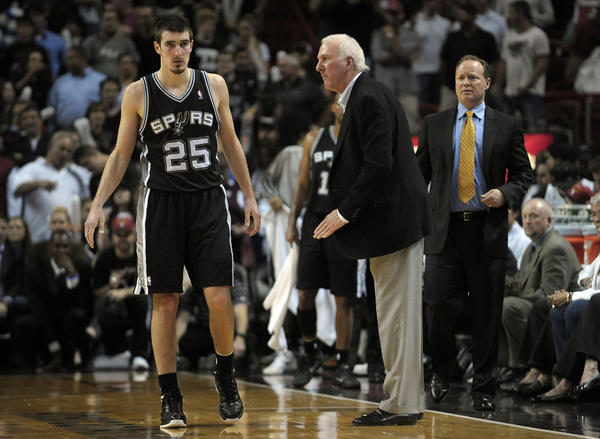 veteran team around them. This year is different and this player isn't exactly a rookie either since he's played professional basketball overseas.

Nando De Colo has been described as "Manu Ginobili Jr." by some because of his out-of-the-box play and fancy passes, which Spurs fans love.

Pop raved about Nando being a "very intelligent player" and also mentions his game isn't the kind where he's "going to jump out of the gym and be on ESPN for dunking," you know a typical Spurs-type player with no ego.

With that description, you can see why De Colo has gotten Pop's attention especially with the Spurs being haunted by injuries so early in the season.

His play is a great fit for the system Pop has put in with this team and he has chemistry with his teammates Tony Parker and Boris Diaw.

The first thing you might notice about him is his style of play, but De Colo's smarts on the court is showing to be the most important attribute he's bringing to the Spurs.

Pop goes on about De Colo.

"He makes good decisions. He's really gaining confidence and doing a good job for us."

With a team that likes to move the ball and find open shooters while still having to figure out if they should score or make the extra pass, Nando's mentality is a perfect fit for both guard positions and small forward if the matchup calls for it. His play will prove to be more valuable in the postseason. His intangibles may represent another Spur besides Ginobili.

With his passing skills, shooting, and versatility on the court, he just may be the second coming of Brent Barry for the Spurs (who did a similar game to De Colo). If that's the case, then it's a welcome addition to the team that San Antonio has deeply missed since Barry left the team.