The next Summer Olympics are still a little less than four years away, but the decision on who will be coaching the next men’s basketball team will 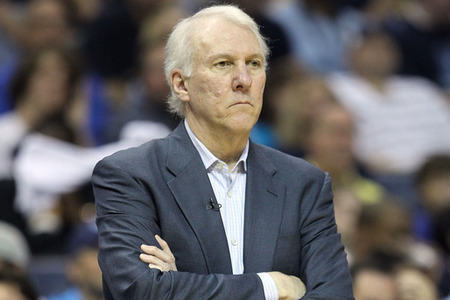 have to be made well before that.

It seems like it’s already been narrowed down to three candidates, Celtics coach Doc Rivers, 76ers coach Doug Collins and the San Antonio Spurs’ Gregg Popovich. There’s no arguing that either of these three would be perfect for the job, but it appears Rivers may be in the lead with USA basketball managing director Jerry Colangelo already saying Doc was on his radar.

Rivers doesn’t seem to want the job though, saying it could damage his relationship with some of the other players in the NBA.

“The biggest difference for a college coach is that the seven players that they don’t [start] can never get back at them,” Rivers said. “If I did become the coach, the seven guys I didn’t play, I would just have to prepare when we play them in the regular season — they are going to try to score 50 on me. You’ve just got to endure that.”

While Doc is coming up with reasons not to coach the Olympic team, he’s also seemingly pushing for Collins to get the job, giving him a chance to avenge his controversial 1972 loss to the Soviet Union as a player.

“Doug would be great,” Rivers said. “When you think about the history of that. My uncle was on that [1972] team, Jim Brewer, and I visually saw the hurt first-hand. That still hurts them.”

This leaves Pop out of the mix, with no one really campaigning for him. Of course, Pop’s accomplishments can do all the campaigning for him, but I would think there needs to be some sort of extra push if he’s going to get the job. I think it would be great to see the Spurs’ head coach leading the American basketball team and there’s no question he would do an amazing job. We just have to wait and see how it all unfolds.