As you scan the sporting landscape since 2000, two franchises will stick out the San Antonio Spurs and the New England Patriots.  Both teams have won multiple championships since 1998 — Spurs four and Patriots three. 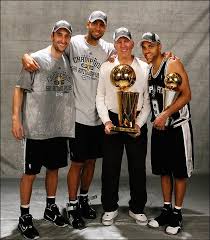 Both teams have gruff Hall of Fame coaches, who seem to play it close to the vest when dealing with the media, but took over teams that could not seem to get over the hump and took them to the title.

Both teams appear to be using a similar blueprint for success, namely a superstar who is the team’s hardest worker and role players who excel at their roles but can take over when needed.

Team success always comes before any personal goals, which means players must either be able to check their ego at the door or they will soon be shown the exit.

Both teams have had success with bringing in “malcontents” from other teams and had them be part of a successful winning season.

They have no problem releasing a player who no longer wants to check their ego at the door or is not able to sufficiently grasp the system (see Randy Moss and Richard Jefferson).

For all the success these coaches have acquired, the media views the two coaches in different ways.

Coach Belichick is seen as being too smug for his own good and this gets people (media and folks around the league) rooting against his team.  An example is when he refuses to give other team’s their just due (see in the Playoffs when he sent a player out to do the post game interview with CBS after the Patriots loss to Baltimore in the AFC Championship).

While Coach Popovich can be curt during the interview between quarters on the court, he has shown a lighter side as well. This willingness to have some give and take with the media has allowed him to be viewed as gruff but still well thought of by the media.

As the old adage goes, “there is more than one way to skin a cat."  The Spurs and the Patriots are living proof, that when you keep your eyes on the prize, the rest will fall in to place.