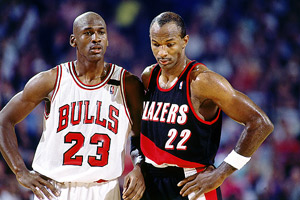 Triangle offense wizard Tex Winter was inducted into the Hall of Fame last week. Winter has more rings than any active NBA player and has been on staff for some of the greatest teams of all time. As a result of his induction, several stories started to trickle out of Springfield from the weekend.

The one that has some sizzle to it comes from Scottie Pippen. Roland Lazen by of HoopsHype.com wrote the legacy Winter leaves behind and included this story that former Bulls executive and scout Clarence Gaines:

“Pip said this to MJ on the team bus after they had been on the Dream team,” Gaines recalled. “If Clyde Drexler had Tex Winter as a coach, he could be on the level of Michael Jordan. Bottom line, Clyde was not a fundamentally sound player.”

Pip’s comment is interesting for a couple different reasons. First, he basically said Drexler didn’t live up to his full potential, which is kind of staggering to think of since Drexler was the best player on a couple of Finals teams and the second best player on a title team. He might be right, I don’t know. Drexler always seemed to be a step behind MJ, but who knows if that was because he lacked fundamentals.

Second, not only did Pippen say Drexler could’ve been as good as MJ, he said it to MJ. This is actually the most interesting part of this story to me, because it shows the relationship Jordan and Pippen had during their playing days. Jordan is a guy who verbally assaulted many of his peers and even got in to a fight with Steve Kerr (which isn’t a fair fight unless Kerr is a ninja), so for Pippen to be able to say that and it not get Jordan all kinds of pissed off shows how much he respected Pippen as a teammate and a friend.

Pip’s general outspokenness about his fellow players and current players has always drawn some criticism, but I think it’s refreshing to hear his honesty. This is just a small section of a great column by Lazenby about the most famous assistant coach ever, so if you get a chance, check out the rest.