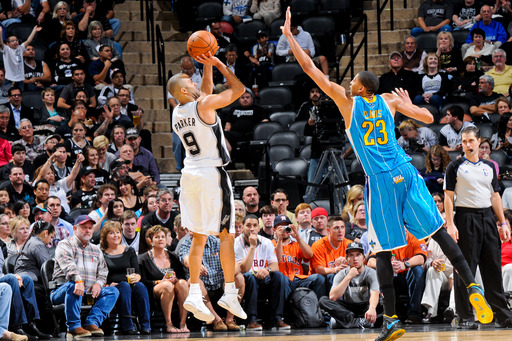 Parker did his part to live up to Williams’ high praise by finishing the game with 24 points and 13 assists with just one turnover as he led the Spurs back into the game with a wrecking crew-esque 10 fourth quarter points for a 106-102 win over the Hornets.

The Hornets started the game on a blistering pace, shooting 83 percent from the field with just minutes remaining in the first quarter. After being down by 10 points late in the quarter, the Hornets cooled down as the Spurs heated up, getting within three points with a Gary Neal three-pointer.

After both teams drew iron through the first few minutes of the second, Matt Bonner scored the first five points of the second quarter to even up the game, but Eric Gordon, Al-Farouq Aminu and Jason Smith kept the Spurs within arm’s reach. While Danny Green contributed eight second-quarter points to keep the game close, Gordon rattled off 17 first half points to give the Hornets a four point advantage going into the break.

While the Spurs couldn’t quite get over the hump in the first half, they clamped down defensively in the second half. With the help of Tiago Splitter, who contributed 12 of his career high-tying 25 points in the third quarter, the Spurs were able to even up the game and take the lead.

“I don’t think our shooting percentage from a distance was that good, so Tiago (Splitter) was making up for it in the paint. He was great,” Spurs assistant coach Mike Budenholzer said. “I think a lot of credit goes to the guards for finding him and putting him in position to score. He was huge for us.”

A Greivis Vasquez three gave the Hornets the lead for an instant before Parker led the Spurs back on an 8-0 run. The Spurs had their largest lead of 12 points with 1:42 remaining before the Hornets bounced back and went on an 11-0 run of their own to get within three points before Manu Ginobili sealed it up at the free throw line.

“I think Danny (Green) set the tone. Danny did a great job with one-on-one defense on Gordon,” Spurs guard/forward Stephen Jackson said. “We tease him a little bit about last game when we played them because Gordon scored four straight on him so he took the challenge tonight, got two big steals and got us going in the second half”.

Parker’s 24 point, 13 assist night counted for his 11th double-double of the season, and over the last four games, Parker is averaging 23 points and 10.3 assists per game.

“I think he was focused from the beginning. He knew that we hadn’t played well against them last time,” Budenholzer said. “To have 13 assists and only one turnover shows how focused and how good he was.”

While Duncan, Leonard and even Spurs coach Gregg Popovich were out for the game, it marked Manu Ginobili’s return. In 17 minutes, Ginobili finished with nine points, five assists, three steals and a big blocked shot late in the game.

“I felt pretty good,” Ginobili said. “At the beginning, I was a little worried so I took it easy in the first few minutes. Then I started to loosen up and I knew I was going to play limited minutes, but I can’t complain.”

With the win, the Spurs are now 34-11 on the season, are tied for first place in the Western Conference and extended their home winning streak to 15 games and now own the best home record in the NBA (19-2).

The Spurs will look for their seventh consecutive win on Friday against the Dallas Mavericks.