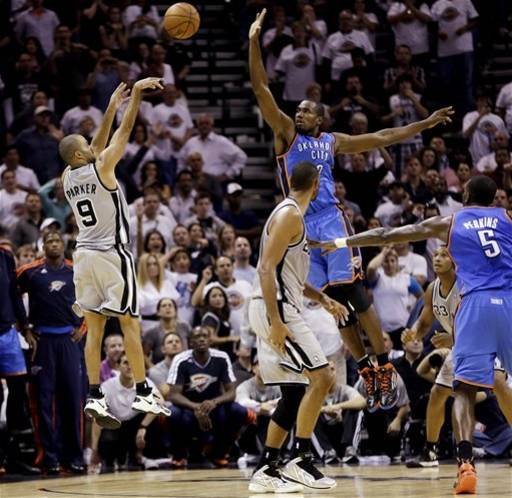 In consecutive nights, San Antonio Spurs guard Tony Parker was given the ball on the perimeter, definitely not Parker’s strong suit, and both times Parker delivered with a late-game three-pointer to give the Spurs a chance at a win.

Tonight it was even sweeter as Parker hit the three and followed with a buzzer-beater on a midrange jumper that swished through the net as time expired and the Spurs got some revenge against an Oklahoma City Thunder team that won the final four games of the Western Conference Finals on their way to the NBA Finals.

Since the Spurs got back together for training camp, what we’ve heard most of was about this team still feeling the pain of losing to this Thunder team, even if it is a bit of a different squad after losing James Harden in a trade to the Rockets recently.

“We're still feeling the pain of that loss to Oklahoma City. When you're in the conference finals and you're up 2-0 and you don't get it done that hurts. Obviously you give them credit, they're a heck of a team, but it doesn't take the hurt away,” Spurs coach Gregg Popovich said on the first day of training camp. “I think we still all feel it very very much. That's a good thing. We gotta use that as fuel. That was a very, very, very tough loss. It's our job to just see what else we can do to combat that youth and that talent, and we've got some ideas and we'll see what happens.”

Apparently for Popovich and the Spurs, Parker, a big game by Tim Duncan and a ball-hawking Kawhi Leonard were just what the doctor ordered.

As Parker’s 13th and 14th points soared through the net in an 86-84 nail biter of a win, the Spurs could finally exhale, with this win as a bit of a pain reliever after having that nasty taste in their mouths the entire summer.

The Thunder started out the first quarter with the same intensity the Spurs saw back in the Western Conference Finals, scoring the first eight points of the game before two Duncan free throws started the Spurs on an 11-0 run. The rest of the quarter went both ways until the Thunder secured a three-point lead to end the first.

Midway through the second quarter, with the Spurs down two, Duncan again jump-started the Spurs, scoring four straight points. The Spurs ended the half on an 11-4 run and dominated on defense, holding the Thunder to 34 percent shooting in the half.

“I think it was excellent. The activity, the communication, the transition D. But more than anything, we took care of the ball,” Popovich said.

The Spurs got hot on offense again in the third quarter, besting every Thunder effort. Danny Green chipped in seven points to lead the Spurs on a 16-5 run and a 10-point advantage before Kevin Durant ended it with a three-pointer with 3:36 remaining in the third. The Thunder crept back in and when it looked like the Spurs would close out the third quarter with a three-point lead, backup guard Eric Maynor launched a contested halfcourt three that found its way to the basket as the quarter expired.

It wouldn’t have been a Spurs-Thunder game without an exciting fourth quarter. When the Spurs abandoned the offensive sets they were running in favor of going four down to Tim Duncan, who had been hot all game, the Spurs offense slowed down and the Thunder took advantage at the other end of the court before Parker knocked in the three to tie and Kawhi Leonard picked off a pass to ruin Oklahoma City’s plans for a late game upset.

For Leonard it would be his fifth steal of the game in an otherwise off night. That’s 10 steals in two games for Leonard who is getting his name out there as an early season defensive player of the year candidate. While it’s a long season, you can’t blame Spurs fans for getting excited. Even Popovich sang his praises after the game.

“Kawhi understands his role and works very hard at trying to be as good as he can possibly be at it and at a young age. He’s pretty impressive,” Popovich said. “ He uses his length and anticipation well to clog lanes and get hands on balls. He just has a knack for it. He’s been very important to us both nights.”

Duncan led the Spurs on his second consecutive 20 point night and added eight rebounds, three blocked shots and a nasty slam over Serge Ibaka. Duncan was one of five scorers in double figures. Parker finished with 14 points and 11 assists, Danny Green had 13 points and five rebounds and Stephen Jackson came off the bench for 11 points and six rebounds.

Durant led the Thunder with 23 points and 14 rebounds and Russell Westbrook had 18 points, but went just 6-of-21 from the field and missed all three of his three-point attempts.

Aside from limiting the Thunder defensively (37 percent from the field), the Spurs dominated inside. Just months ago, Kendrick Perkins and Ibaka couldn’t seem to miss, but the pair only had six points between them as the Spurs outscored the Thunder in the paint 44-24.