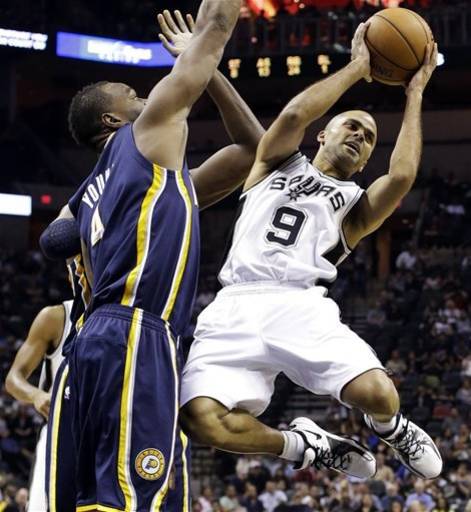 Talking about end of the season awards candidates after a week or two into the season can get pretty ridiculous, but you can't blame NBA bloggers and media members for being excited early on this season. Regardless of whether or not certain players will be playing as well toward the end of the season, or sustain throughout, there's no doubting some players have had an excellent start.

For the San Antonio Spurs, although he's struggled through his last two games, Tony Parker has definitely put himself in that contention. In fact, Chris Sheridan recently listed Parker fifth in his MVP rankings one spot after another Spur Tim Duncan.

Since we are using FT percentage to differentiate between the top two Spurs, we must bring up Parker’s 71 percent mark through three games. Yet we also must point out his assist-to-turnover ratio of 4.5 is only half as good as those of Jason Kidd and Chuck Hayes (9.0). Yes, Chuck Hayes. (Sorry, Tony. Needed to needle you. Nice buzzer-beater vs. OKC).

While Duncan has seemingly turned back the clock so far this season, there’s no doubting there was a changing of the guard with the Spurs last season. A team led by Tim Duncan for over a decade turned the keys over to point guard Tony Parker as the floor general became more of a leader and put the team on his back several times throughout the season.

Several times last season, Parker was mentioned as an MVP candidate and when told of the news, Parker took a classic Spurs approach and laughed it off.

“It’s like every time somebody asks me that question I have to laugh because that’s LeBron and Durant stuff,” Parker said then. “But I’ll try to do my best to keep running my team.”

Parker ended up fifth in MVP votes last season, likely to open up more than a few eyes, except for the ones across from his all last season.

It wasn’t just your usual slew of sports network personalities, reporters and even bloggers calling Parker a legitimate candidate, it was also his peers.

As I made my way through several visiting locker rooms at Spurs home games last season, I made sure to ask former Spurs players and opposing guards their thoughts on Parker’s performance throughout the season.

“He’s been playing at a great level all year. He is really taking that offense over and he is picking his spots well,” Magic guard J.J. Reddick said. “He knows when to be aggressive, when to score and when to be a playmaker. Tony is as good as any point guard in the league right now.”

“He does a great job of running his team. He makes that team go and it showed tonight. He is always in attack mode,” Nelson said.

Former Spurs Steve Novak of the Knicks and George Hill of the Pacers also commented on Parker’s standout year last season, a season in which he became the Spurs’ all-time assist leader.

“He’s playing his butt of and we saw tonight how well he’s playing. He puts so much pressure on the defense. This is the young Tony Parker that we know,” Novak said.

Goran Dragic called Parker “great” and told me he was very tough to guard. Kemba Walker said as a young guard in the league, he had watched Parker for a long time and always looks forward to his matchups with him.

Parker’s Spurs teammates and coach Gregg Popovich called Parker unbelievable, focused, aggressive and steady and you’d likely have a hard time telling Spurs fans he’s been anything short of that early on this season.

While 78 games remain in the regular season, those three letters, MVP, have popped up in the Spurs locker room again, and it hasn’t been in reference to the Jersey Shore cast.

“Tony (Parker) had an MVP season last year and he’s starting off the season the same way. If he plays like that it is going to be hard for us to lose,” Spurs forward Stephen Jackson said after a win over the Oklahoma City Thunder last week. “We have so many players that can knock down shots and with our point guard, the leader of our team, playing like that it’s special.”

On consecutive nights in his first two games, Parker hit game-saving clutch three-pointers, and in the Thunder win, he closed the show after he lost Russell Westbrook and buried a jumper over Serge Ibaka’s outstretched arm.

In his first three games, Parker was averaging 20.3 points, nine assists and 2.6 rebounds per game. Parker struggled a bit offensively in his last game on Monday against the Pacers, but he also played considerably less minutes in a huge win for the Spurs second unit.

Parker still managed seven assists and four rebounds in just 26 minutes. That gives him an average of eight assists per game, good enough for eight in the league in assists. Before his last two games, in which Parker had a dip in playing time, Parker was near the top in the league in assist per turnover ratio.

While it’s premature to call anyone a MVP favorite this early in the season, it certainly wouldn't be new to Parker to start hearing the MVP chants in April and May again.