Before Wednesday night’s home game against the Orlando Magic, the NBA was buzzing with Dwight Howard trade rumors and reports that he 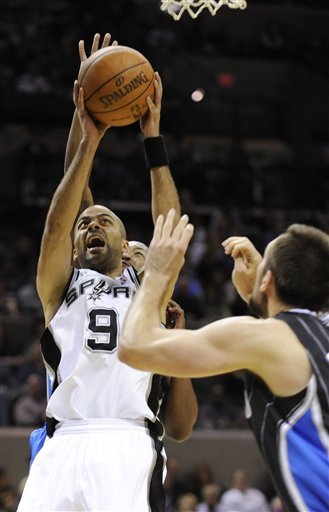 would and wouldn’t waive his early termination option.

Magic coach Stan Van Gundy and Howard deflected  answering any questions regarding the trade deadline to the scrum of media in the visiting locker room.

But in the San Antonio Spurs’ locker room, it was business as usual, as has been the case leading up to trade deadline for the last several years for the Spurs.

The Spurs took the same approach out on the floor in what was a tightly-contested game until the late fourth quarter to end their home stand with a 122-111 win.

“They average 100 a game and we held them to 22 points over their average,” Van Gundy said. “We just couldn’t keep up at the defensive end. We just couldn’t.”

The Magic lead early in the first quarter and got out to a 10 point lead, but after Manu Ginobili entered the game with 5:15 left in the first, the Spurs went on an 8-2 run to erase the deficit with Matt Bonner and Kawhi Leonard hitting threes to spark the rally.

The Magic fought back, but as was the case the entire game, the Spurs found a way to answer with two more three-pointers at the end of the quarter by Gary Neal and Ginobili to gain the lead 36-35 at the end of the first quarter.

The Spurs kept the lead and increased the margin before the Magic started chipping away midway through the second.

A Jameer Nelson layup gave the Magic a two point lead with just over five minutes remaining, but as they did in all four quarters, the Spurs closed out well to regain the lead.

“They are a good team. Solid. with a lot of shooters, so we are happy that we played for 48 minutes,” Ginobili said.

Tony Parker, who managed to lead the Spurs through the first half despite struggling with some missed layups and missed foul calls, heated up again in the second, contributing seven late second quarter points to give the Spurs a one-point lead entering the half.

As they dd in the first half, the Spurs started out cold in the second half, coming up empty on their first three possessions while the Magic went on a 6-0 run. Duncan ended the rally with a jumper to pull within four points. The Spurs went on a pair of additional runs themselves while Manu Ginolbili knocked down two three-pointers to give the Spurs an 89-84 lead entering the final quarter.

While the Magic fought back and temporarily pulled ahead, it was all over when Parker took over the game with just under eight minutes remaining. Parker’s 16 fourth-quarter points were too much for the Magic, while the Spurs ended their second straight win with MVP chants for Parker.

“He was great and he took control of the game,” Duncan said about Parker. “He’s been the guy for us all year long and he’s controlling the game. He’s been unbelievable.”

The chants were deserved as Parker went off for 31 points and 12 assists. The other members of the big three were right behind Parker. Duncan finished with 21 points and 13 rebounds, and Ginobili came off the bench for 14 points in just over 22 minutes.

“As I mentioned with Tony, it’s been the same all year long. He’s been consistent,” Popovich said of Duncan’s effort. “He’s having a really, really good year. He showed his value again tonight.”

Jameer Nelson lead the Magic with 25 points and 7 assists, and Howard finished with 22 points, 12 rebounds and three blocked shots.

The Spurs will play their next two games on the road, a back-to-back against Oklahoma City and Dallas on Friday and Saturday before they return home next Wednesday against the Minnesota Timberwolves.