If you love an up tempo high scoring game, you'd love the highlights to the third game of four meetings between the San Antonio Spurs and the 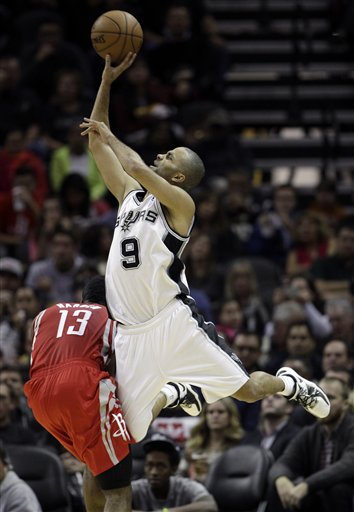 Houston Rockets. If you believe in defense first, then this wasn't the game for you.

The Spurs were once seen as a defensive juggernaut that wanted the final score to be in the low 80s if possible, but this year it's the opposite.

The Spurs came out firing with a 41 point first quarter then saw the Rockets come back with a vengeance in their own run, 36 points in the second quarter.

While some Spurs games have ended with the final scores being over 110 points for their opponents, it's mostly been during garbage time and the third string players on the court while the main core rotational players rested.

Yesterday's game saw the "Big 2" of Tony Parker and Tim Duncan log more than 30 minutes since the Rockets wouldn't give up and kept coming back when the Spurs would least expect it. Parker's comments after the game explain what the Spurs think about their defense this game.

"It was a very up-tempo tonight and I personally love it but we have to get stops," said Parker.

The Spurs have enjoyed high scoring games, even during their "boring" championship runs. They played an exciting series against the Phoenix Suns in 2005 while outscoring them and playing defense and getting stops when they needed it.

In those playoffs, the Spurs were their usual defensive minded self before and after that series. Their defense was by choice as they gave up the majority of the points to only two players in Steve Nash and Amar'e Stoudemire.

On Friday night, it was a different story. James Harden seemed to be unstoppable at times and Jeremy Lin had a few tricks up his sleeve, both combining for 54 points and 15 assists.

The Spurs know that a running game is fun and helps the team play looser on the court, but they also know that the running game isn't known for winning championships and they have executed the winning formula in playing good defense.

Luckily for San Antonio, they have a coach that'll keep reminding them that defense is key and won't let them get too comfortable in a score first mentality.