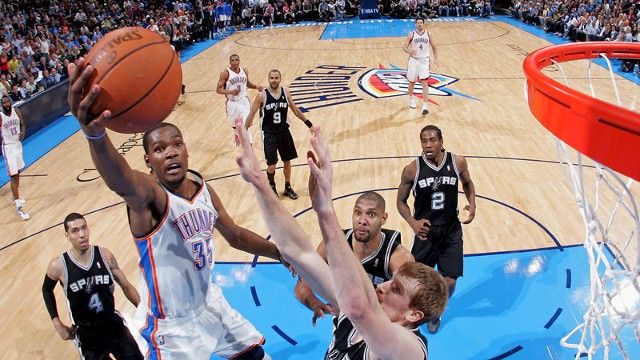 Though the Spurs have defeated OKC this season 86-84 and hold the overall series advantage (83-63) but with the Spurs losing four-straight to the Thunder in last season's Western Conference Finals after San Antonio was up two games in the series, might have set the tone for a new rivalry budding in the NBA.

Yet despite this, Tony Parker feels there is no Spurs-Thunder rivalry… yet.

During the post-game media session after the Spurs-Celtics game, Parker weighed in on whether or not there is a rivalry between the two teams and says it comes up short when compared to the days of the Lakers and Mavericks.

Of course nothing will come close to the days of the Lakers, Mavs and Spurs battling it out for the West crown but TP is right to say a budding rivalry may be growing.

Aside from last season's West Finals series, there was Stephen Jackson calling out Serge Ibaka this season, the similarities between the two franchises (Sam Presti bringing the Spurs' system to OKC) and how there is a high chance these two teams may be the last standing once again battling for a chance to go back to the NBA Finals.

What do you have to say Spurs fans? Is there a Spurs-Thunder rivalry or not?