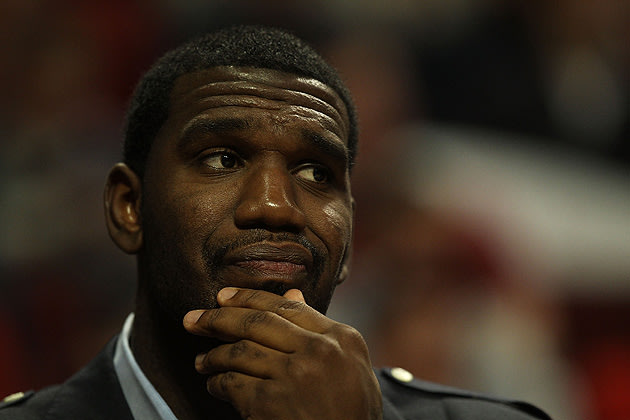 Former number 1 overall pick Greg Oden has been plagued by injuries his NBA career and he's determined to make a comeback from his third microfracture surgery. Many teams are already rumored to be interested in him as his potential is looked on as being one of the best big men of the game, if he can stay healthy. The Miami Heat are looking to pursue him because of their defensive woes, but that may not be the easiest decision for the franchise as they're likely to be over the luxury tax until the 2015-2016 season and the new collective bargaining agreement will be tough against repeat offenders.

San Antonio Spurs fans have been wanting the team to sign a legitimate big man to help Tim Duncan get a fifth championship ring and have been excited about the signing of Europe's best big man in Aron Baynes. With Baynes reportedly on board, should the Spurs go after Greg Oden? Even though the team doesn't have any roster spots open, there's plenty of possibilities for the Spurs that make an Oden signing realistic depending on which route the organization wants to go.

With Baynes joining the team, this will mean the Spurs will have to make room by waiving or trading a player. The logical candidate for this would have to be Dejuan Blair, who hasn't seen many minutes this season with Tiago Splitter improving and bringing what Dejuan does to the starting unit. Boris Diaw's versatility makes him an obvious candidate for the third big slot in the rotation with Matt Bonner's shooting bumping him over Blair. Once room is made for Baynes, the Spurs have would to be in the same situation for Oden. The team will have a free agent in the big position with Tiago Splitter finishing off his first deal. If Aron makes an impression on the team, Splitter will easily be replaceable especially with a $4.9 million qualifying offer. That would leave the Spurs with a roster spot for Oden and also possibly more money to offer him to lure him from other contenders (depending how much Manu Ginobili and Stephen Jackson demand if they return to the team).

Another scenario is the team using their amnesty clause, but that wouldn't be too realistic since the likely candidate for that would be Matt Bonner. Bonner is due $3.9 million next season and would best be used as trade bait with his expiring deal over just letting him go and still counting against the salary cap. With a Splitter departure, Bonner could fill in while Oden is rehabbing or slowly getting back into shape. Oden's future in a Spurs uniform will depend on Tiago Splitter most of all. If Splitter will take a reasonable deal, he may be wearing a Spurs jersey next year and there'd be no minutes for Oden in a San Antonio jersey. Tiago playing well this season shouldn't be too much of a shock either. He's in a contract year and trying to inflate his worth as much as he can. The team may be thinking about this too and may balk at bringing him back, which would leave the door for a Greg Oden debut in silver and black if he wants to play next to a former number one pick and the greatest power forward of all time in Tim Duncan.