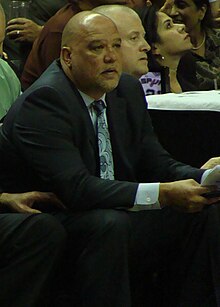 LAS VEGAS – Here’s something about Summer League that makes it a unique experience. You’re crammed in to this relatively tiny gym where the “locker room” is actually a section next to the bleachers divided by some drape and piping.

You also enter in the same place as some team scouts and executives. This leads to overhearing conversations in an elevator about whether or not some scout for a Southwest Division rival of the Spurs should’ve gotten married. Good times.

The other fun part is being around so many brilliant minds and getting to talk hoops with them, even for a few minutes.

Saturday featured four games over an eight-hour span and at the end of it were the Washington Wizards and the Houston Rockets. On the Wizards sideline was former Spurs assistant coach Don Newman. While Newman was waiting for Wizards Summer League coach Sam Cassell to finish speaking to the media I asked Newman if he saw any Tony Parker and Manu Ginobili in guards John Wall and Bradley Beal.  Newman thought about it for a second, smiled and gave me a “not yet” before elaborating.

“Wall can get a lot of places on the floor,” Newman said. “I hope we see him develop a floater.”

Wall’s game does show a lot of improvement, but he didn’t improve a ton from year one to year two.  Having Coach Newman along with Cassell will only help his development into a more steady floor general.

The Wizards had just won their game against the Rockets and Newman was in a relatively good mood. He also told me he’d miss the Spurs organization and the people of San Antonio.  Ditto Coach Newman, ditto.