NBA Finals: Were Duncan’s Efforts All In Vain?

Game 6 was the decisive chapter of the 1998 NBA finals, breaking all records and representing a fairytale finale to the Chicago Bulls’ ‘last dance’. When the music stopped, it was time for another team to fill the void, and the Spurs wasted no time in stepping up.

Every Spurs fan of a certain generation can tell you exactly where they were when their idols won the NBA finals for the very first time, back in 1999. Here, we look at whether or not Spurs’ image truly changed in the years between then and 2014, and if it stacks up against the more silverware-laden franchises.

Tim Duncan and David Robinson – as the twin cores of power in the Spurs lineup of 1998/99 – are the obvious names that come forward immediately, when looking for figures that typified the pan-millennial upstarts from southern Texas. They do so for good reason, even though it was Avery Johnson’s heroics that provided the ultimate climax in 1999.

Duncan proved equally influential fifteen years later, finishing third in the points during Spurs’ decisive game against Miami Heat. The efforts of Duncan and Robinson are all the more remarkable, given how the new millennium also saw the rise of the LA Lakers, led by the imperious duo Shaquille O’Neal and Kobe Bryant.

The dynasty the Lakers might have created from those two men alone could have rivalled any other. The fact that Spurs stopped them is a fairytale itself, yet most NBA fans from outside the southern states – and a sizeable number within them – will far more readily name a man like Bryant than Duncan, when asked to reel off a litany of A-list players from the past and present. 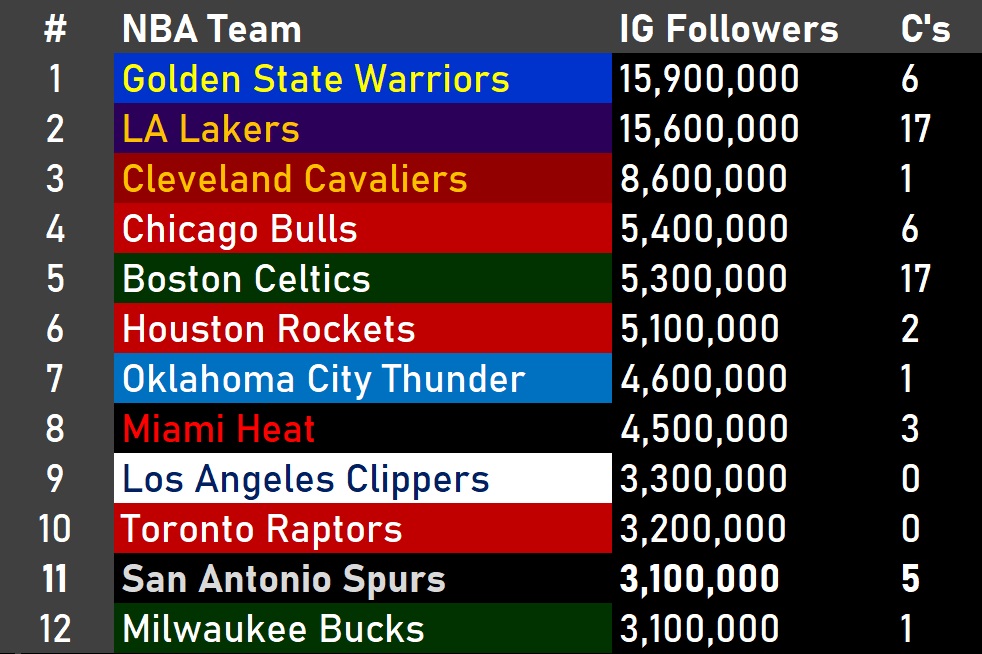 Dated December 2020 by Stadium Maps, this chart shows how Spurs are always doomed to be overshadowed by bigger franchises, despite having more success than some of them.

Spurs also need longevity in any successful era, if they are ever to truly stack up alongside those established in bigger cities and state capitals. The history books show that the triumph of 2014 did not yield the same mini dynasty that 1999 did, and those seeking high-value odds to bet on NBA games and futures can see that the years since have not been particularly kind to the Spurs.

The harsh reality is that there are several issues within the starting lineup today that need addressing. In retrospect, this gives their more recent championships have the same ‘temporary’ feel as the Cleveland Cavaliers’ fleeting golden era of the 2010s.

Although the story of the fifteen years that separate Spurs’ first and last titles is very wholesome and ‘Hollywood’, it isn’t particularly marketable. By contrast, the sight of LA Lakers surging with LeBron James as their glorious leader feels much more like a narrative that people can relate to. The sporting world lacks a colossus – a Mike Tyson-style homegrown figure of invincibility for a new generation to idolise.

Over in LA, the likes of LeBron and Durant can only grow in stature, and add to the Californian dominance of NBA teams on social media identified by Stadium Maps, even if their bodies may plateau. In short, the battle to take on the biggest franchises is more one-sided than ever.

In 1999, Spurs’ story was a classic one, of a small-time team with long-suffering fans finally hitting the top. The angle in 2014 could, therefore, not be the same, as Spurs did not exactly come from nowhere to win their most recent title, having lost out to Heat by a slither the year previously.

In turn, the development of Spurs’ image in the latter part of their golden era was not based on an underdog story. Rather, they were a franchise that never gave up, and had the psychological capacity to recover from such heartbreaking spectacles at the end of the 2013 finals. Again, however, the appeal of such character must be backed up by long-term consistency.