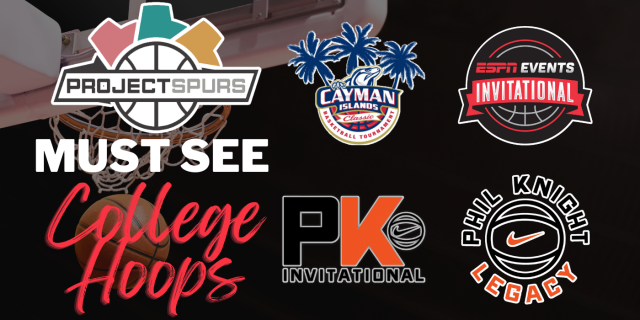 All college basketball fans, casual or otherwise, should be watching their teams before conference play. There are a ton of great matchups and non-conference games to see before the most crucial part of the season starts with these College basketball tournaments.

This is part two of the multi-team events you should know about and you can find part one here. Let’s get right into it with what might be the most eclectic gathering of teams, which happens to be taking place in the Cayman Islands.

This tournament takes place from November 21st to the 23rd and features some strong mid-majors as well as LSU and Kansas State from the Power 6 schools. Those other schools feature Nevada, Tulane, Western Kentucky, Illinois State, Akron, and Rhode Island.

LSU is going to be an odd team to watch since its entire roster is made up of transfer and incoming freshmen. They had all of their players go pro, graduate, or transfer out of the program entirely after it received its Notice of Allegations from the NCAA.

Western Kentucky is usually a well-coached team thanks to Rick Stansbury and these teams should all be playing at a similar level. While the games may get sloppy or not be at the same level as a Kansas-Kentucky game, they will be competitive.

This could be one of the more low-key fun tournaments played around Thanksgiving. It’s in Orlando at the Wide World of Sports and takes place November 24th, 25th, and 27th. This tournament has some sneaky good teams who could become some nice tournament teams in March.

Florida State should be vastly improved from last season assuming everyone stays healthy and Stanford will be a nice team with a likely first-round NBA Draft pick in Harrison Ingram. Oklahoma has turned over its roster drastically, but should still be well-coached under Porter Moser. Seton Hall might be rebuilding under a new head coach after Kevin Willard left for Maryland and will have some new faces on its roster.

Ole Miss should be improved from an SEC season that saw them win only four games thanks to many returners getting an extra year of experience. Nebraska should come into the season with a sense of desperation as the Fred Hoiberg experiment has not gone well so far. It revamped its roster and coaching staff so they have to be competitive or there are bigger changes coming.

This is not to be confused with the Phil Knight Legacy college basketball tournament but has some intriguing teams participating nonetheless. It takes place on November 24th, 25th, and 27th. It features Oregon and likely some amazing uniforms from them as well.

The other teams participating in this event include UNC, Michigan State, UConn, Villanova, Portland, Alabama, and Iowa State. There should be plenty of great games in the second and third rounds of this tournament as the powerhouses presumably win their games.

Alabama playing Michigan State in the first game should be the most exciting one of the bunch to start this tournament. The Spartans are revamping their roster while the Crimson Tide brings back some veterans and has to mix in some transfers with a few freshmen.

Villanova is in its first head with a new head coach after Jay Wright retired, UConn is looking to be a Big East contender this year. UNC is coming off a Final Four appearance and returns much of its roster while Iowa State looks to prove the doubters wrong who have them as a bottom-tier Big 12 team.

This is the other half of the Phil Knight tournament weekend and it features a few of Nike’s premier college teams. Included in that are Duke, Florida, Gonzaga, Xavier, Oregon State, Purdue, West Virginia, with Portland State thrown in for some local flavor.

Florida has a new coach and is revamping some of its roster, but does bring back Colin Castleton and some other underclassmen who should see some major minutes this year. Duke is coming into this tournament with a new coach as well in Jon Scheyer and also brings in the top recruiting class for 2022.

Purdue should be fun to watch as coach Matt Painter always finds shooters and ways to get them open. They also have the beast in the middle known as 7-foot-4, Zach Edey who is always a delight to watch. West Virginia has nine new players on its roster this season so there will be some growing pains.

Xavier has a new coach in Sean Miller so he will have to implement his system and find someone to replace Paul Scruggs. He has Jack Nunge returning as his leading scorer, but this team is still a slight unknown right now.

What College Basketball Tournament will you be tuning in to?