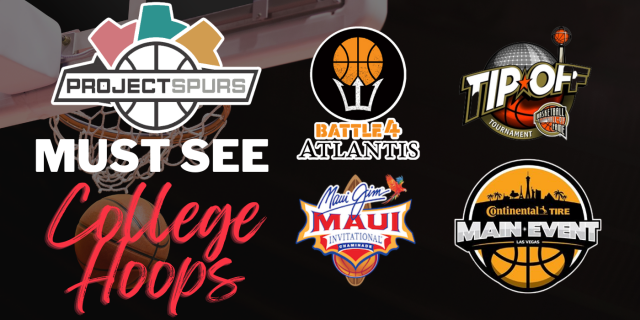 If you’re a casual college basketball fan or a diehard one, there are several multi-team events and tournaments you should know about heading into the season. They always take place before conference play and usually produce matchups we wouldn’t otherwise get to see. If you haven’t already gotten to read about some excellent one-off matchups, you can find some of those here and here.

Now, we are getting to the college basketball tournaments or MTEs that could give us multiple great matchups. One such tournament is the Continental Tire Main Event. It features Baylor taking on Virginia and UCLA playing Illinois. All Power 5 schools and all expected to be strong in their conferences this year. This event takes place from Nov. 18th to 20th and should serve as a nice warm-up for Thanksgiving week.

Virginia is coming off a down year but looks to bounce back while the Bears are only two years removed from a national title. They also have five-star recruit Keyonte George in tow who should keep them competitive nationally. Virginia’s vaunted Packline Defense will be a great early-season challenge for the Bears.

UCLA is expected to be the class of the PAC 12 while Illinois should be a team in the top half of the Big Ten. They lost some talent in Kofi Cockburn and Tent Frazier. However, they added five-star recruit Skyy Clark and Baylor transfer Matthew Mayer. So this game could be incredibly fun to watch.

And of course, no matter who wins each game the fans win with some fun matchups.

This event is taking place in Connecticut at the Mohegan Sun Arena on November 19th and 20th. It features some Power 6 (including Big East for basketball reasons) schools in Miami (FL), Maryland, Providence, and St. Louis — who could be a preseason top 25 team.

Maryland is going to be an enigma as it starts a rebuild with coach Kevin Willard, who comes from Seton Hall. That Big East knowledge might help them in a matchup with Providence if both teams advance to the championship round. Miami returns Isaiah Wong and brought in former K-State sharp shooter Nijel Pack so they should compete in the ACC this season.

Coach Ed Cooley always has Providence near the top of the Big East so they should be good once again. They bring in some freshmen along with transfers like Noah Locke of Florida and Louisville fame, Bryce Hopkins from Kentucky, and have five other transfers on the roster. St. Louis returns Yuri Collins, who was one of the best pure point guards in the country last season. They have plenty of new faces to integrate into the roster, but they should be a good team.

Despite having a bit of a repetitive name (thanks to a sponsor and location overlap), this tournament is the premier event every season. It brings in the best teams and runs during Thanksgiving week. This year that means November 21st to 23rd and there are eight teams playing.

Ohio State, Arizona, San Diego State, Arkansas, Creighton, Louisville, Cincinnati, and Texas Tech are all participating. You have a consistently good Big Ten team, the class of the PAC12 the last couple of years, a Mountain West powerhouse, a team with three potential first-round NBA Draft picks, a team with a couple of potential draft picks, a school looking for rejuvenation under new coach Kenny Payne, an always solid AAC team, and another team just a few years removed from a national title.

You can find the bracket here for that tournament and drool over the matchups. While the first round doesn’t look particularly intriguing, any of the favored teams can be upset and there is usually at least one of those in these tournaments. So be on the lookout.

This is another superb tournament that features some of the heavy hitters in the college basketball world every single year. This one has a slight overlap with the tournament above as it runs from November 23rd to 25th, which means the championship game is on Thanksgiving. Do you want to eat that day? Do it with a basketball game on and thank me later.

This event features the reigning national champs in Kansas. The challengers to knock them off early in the season include Dayton, Wisconsin, N.C. State, USC, BYU, Butler, and Tennessee. Most of those teams should have legitimate chances to knock off the Jayhawks and this should make for an intriguing few days. It will get all the hype from ESPN with all of the games being played on their family of networks.

For context, several of these teams are considered to be in the top half of their respective conferences. Tennessee, USC, Dayton, and Wisconsin fall into that category. Butler could be a surprise team with former Ohio State head coach Thad Matta making his return to the sidelines, but don’t get too optimistic about it in Year One.