The NBA announced on Wednesday that Dejounte Murray was named to the 2018 NBA All-Defensive Second Team.

Murray received 32 first place votes on the way to his first ever All-Defensive team selection, beating out other guards like Chris Paul, Paul George, Klay Thompson and Russell Westbrook.

In his second year out of the University of Washington, Murray took over as the San Antonio Spurs starting point guard in January, replacing the then 35-year-old Tony Parker.

Murray played in 81 games for the Spurs this season, starting 48 of them. In that time he averaged 8.1 points, 5.7 rebounds and 2.9 assists while also maintaining a Defensive Rating of 98.1, which was best among Spurs regulars.

More impressively, Murray had a number of other accolades that won voters over.

Murray was the only player under 6-6 to tally 400 rebounds, 90 steals and 30 blocks this season. He also was a catalyst in San Antonio allowing 99.8 points per game, which lifted the Spurs to their 23rd straight season of holding opponents under 100 points per game, the longest active streak in the league.

Check out the full All-Defensive teams and vote tallies below. 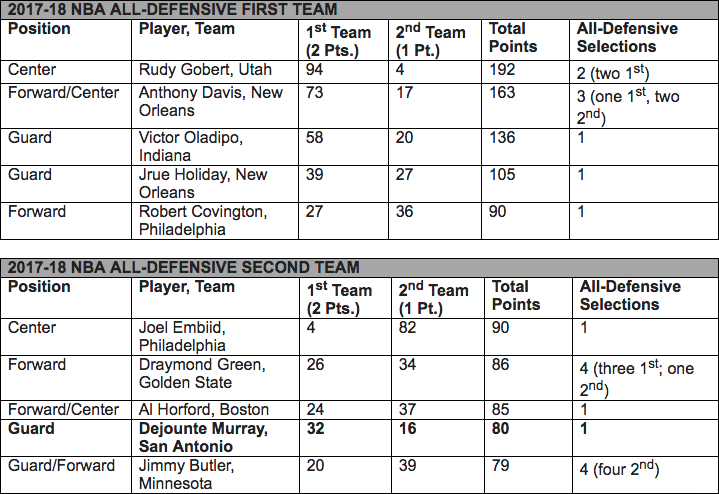