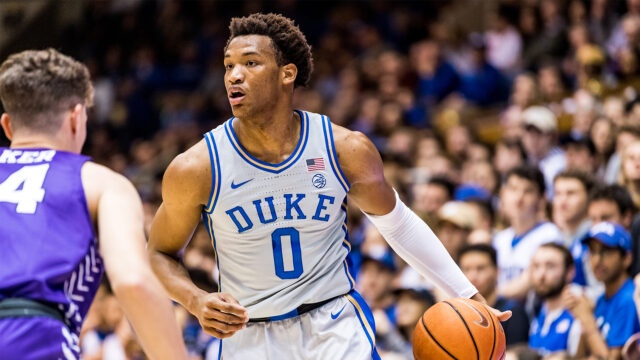 The Duke Blue Devils had an amazing season, making it to the Final Four before losing to rival UNC. Junior wingman Wendell Moore was a huge reason for the team’s success and will now parlay that into getting drafted in June. The 6-foot-5, 213-pound wing improved every year in college and is still relatively young for his class, only turning 22 after the draft.

While Moore is not elite at a singular skill, he is adept at quite a few. That kind of versatility without too many real weaknesses should give him opportunities to get immediate playing time. Especially if there are roster shakeups in the summer. Here are Moore’s stats from this season.

Shooting is now a dependable skill for Moore and should be the one that gets him onto the floor immediately. He’s also a good cutter and is superb in transition. His defensive versatility should also help him get playing time as he can guard three positions and can likely play two or three positions on offense as well. He’s a good defender with size who moves his feet well when guarding in space and pressures ball handlers.

Posting up smaller players is something Moore does well as he can shoot over them most of the time. He will go to his fadeaway or try to get right to the rim. No fancy moves, but they are effective. While it’s nice he can play down low, he can also run the offense if needed from the point guard or shooting guard spot. He was asked to do that a little bit at Duke so he is familiar with it, but could use some extra time in working on that.

Moore was generally a double-digit scorer throughout his junior season, but he did have a few troubling and uneven performances. That shouldn’t be too concerning as he is an older prospect and knows how to bounce back from those kinds of games. I am willing to bet that teams will find him quite mature in the interview process and that should help him out as well.

His draft combine should tell us just how athletic he is, but we know he’s a pretty good athlete from the three years of dunks and highlights reels he’s accumulated. He can get up to the rim quickly and get down the floor on a fastbreak pretty quickly too.