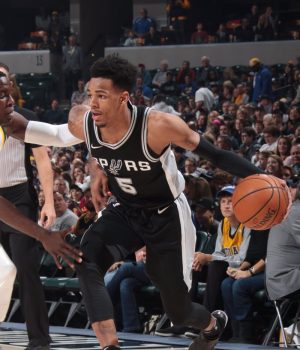 The San Antonio Spurs fell 97-94 to the Indiana Pacers at Bakers Life Fieldhouse on Sunday afternoon as the Silver and Black played their third game of a four game road trip.

The loss is the second straight for the Spurs, but this one will likely sting the most after San Antonio blew a nine point lead with under four minutes to play in the game. Below is what went good and bad for the Spurs, as well as three standout players: LaMarcus Aldridge, Pau Gasol, and Rudy Gay.

[Project Spurs’ Tom Petrini provides instant reaction to the Spurs’ loss to the Pacers in the audio below.]

LaMarcus Aldridge: With Kawhi Leonard out, Aldridge continues to carry the Spurs on the offensive end. He finished with 26 points and eight rebounds on Sunday, while schooling Indiana big man Domantas Sabonis. The Spurs forward continues to show his range, hitting 1-of-2 shots from beyond the arc.

San Antonio’s starting big man combo of Aldridge and Gasol combined for 43 of San Antonio’s 97 points, proving no match for defenders Al Jefferson and Sabonis on the Indiana side of the coin.

Pau Gasol: The NBA veteran center is showing flashes of why the Spurs signed him to a 3-year deal in the offseason. Gasol finished with 17 points and seven rebounds on Sunday. What was impressive other than his effectiveness near the basket on defense or scoring, was his passing ability.

Gasol finished with five assists on the night, finding his teammates for buckets. He and Aldridge had the high pass in the post working to perfection and he found Brandon Paul for a open jumper in the second quarter and Kyle Anderson for a lay up in the third. Having a big man who can assist will prove big for the Silver and Black as the season goes on.

Rudy Gay: The small forward provided a spark for the Spurs off the bench during their second quarter run. Gay finished with 10 points on 3-of-8 shooting, looking more comfortable in the San Antonio offense with each passing game.

His chemistry with Aldridge and Gasol is developing nicely and will be an important key for the Spurs once Leonard and Tony Parker return from injury.

Up next: The Spurs are now 4-2 on the season and will return to the court tomorrow night in Boston when they wrap up their four-game road trip against the Celtics at 6 p.m.