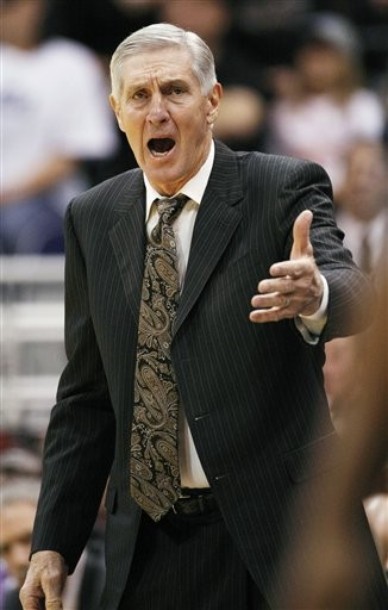 Many were shocked to hear the news of Jerry Sloan’s resignation as head coach of the Utah Jazz last week, especially after signing an extension with the Jazz.

After 22 full seasons and well into his 23rd with the Jazz, the announcement came as a surprise to many. Even Jazz great Karl Malone sounded off on Sloan’s resignation saying his former coach would never quit.

There are even reports that Sloan’s riff with point guard Deron Williams and a belief he became undermined with Jazz ownership were the main reasons for his departure.

Last week in Philadelphia I spoke to San Antonio Spurs players Antonio McDyess and Richard Jefferson to get their views on Sloan’s resignation. Here is what they had to say.

“He’s one of my favorite coaches and to see him resign definitely was eye-opening and a surprise to me. Jerry Sloan definitely a legend in this league as a coach and as a person. Just to see him step down was sad to see. I’m sure he has something in store and hopefully it will work out for him.”

Jefferson says Deron Williams is not to blame:

“I was shocked. I was even more shocked to hear that they were actually trying to blame a player,” Jefferson said.

“There’s no one player that’s going to run out a coach. I think sometimes a coach looks at a situation and just feels like he’s ready to move on. To say that in 26 years that Deron Williams is the first player, I think that’s just disrespectful to both sides. To say that about Deron, and to say that about their coach, to say now (Sloan) can’t handle that.”

“Like they say, Karl Malone was no angel when he was walking around Utah. They had ups and downs, they had losing streaks. They had years where they struggled, the situation with Carlos Boozer. There has been a lot of things that had gone on over the course of his 26 years (sic) there. So now to say him and Deron weren’t getting along and that’s why the coach left, I think that’s a bad, bad excuse.”

Jefferson on how Sloan left the game:

“It’s not up to us to determine how we feel how he should go out,” continued Jefferson.

“If he decides to go out before the playoffs for health reasons, if he wants to take a leave, whatever it is, it’s not for the media, it’s not for the players to determine. If he felt like right now is the time where his passion wasn’t in it, then who are we to judge.”

Jefferson went on to say, “This man has committed more time than any coach in professional sports has. To say he needed a certain way to go out, he has earned the right to go out however he wants. It’s very similar to Brett Favre. A lot of people felt Brett Favre should have retired but if he felt like he could play more, then it’s his decision. He has earned that right.”

Those are the thoughts of two Spurs players on Sloan’s resignation. Share your thoughts on the topic and how McDyess and Jefferson reacted in the comments below.