The matchup of the night between the San Antonio Spurs and Philadelphia 76ers will be between Tony Parker and Jrue Holiday. 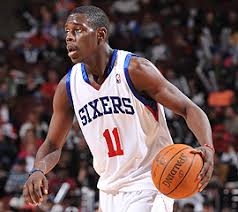 This will be the first matchup of the season between the two teams. Both men have similar games and will look to outplay each other in the same areas.

Holiday, like Parker, prefers to get in the paint and also do his damage from mid range (56% from restricted area and 44% from mid range).

Unlike the Spurs, the Sixers don't have much of a balanced attack. They're a set up type offense who prefers to run if the defense allows it while the Spurs look to play different styles throughout the game.

He has to attack Philly in the pick and roll and force their athletic team to keep rotating. If everyone on the Spurs is moving, that'll give the team open shots. The Spurs do a good job of rotating while a play is in motion, especially with Parker in the pick and roll. Philadelphia is younger and athletic but very inexperienced and the Spurs can exploit that.

He has to pressure Holiday when he steps in the 3 point line. He's shooting 35% or under from each side of the 3 point line, so that's not the shot he'll be wanting. This pressure and funnel in the baseline will make it hard for Holiday to match his average of 9apg and will force another player to beat them. After Holiday, the Sixers have Thaddeus Young but after that it's pretty bleak for a solid consistent option. The Spurs don't have the luxury of switching Parker to another player and pressuring will take a lot out of Parker on this end of the floor, but that's where the depth of San Antonio comes in. If Parker can last the majority of the game without winding down because of defense, the Sixers will have a difficult time scoring on the Spurs.