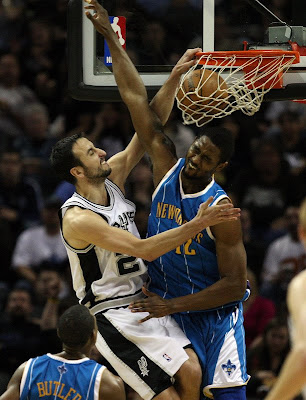 A few interesting things happened at Spurs media day Monday.  Eddy Curry turned up in a San Antonio Spurs uniform, DeJuan Blair blew off WOAI's Don Harris, and Tim Duncan admitted Stephen Jackson's rap albums and Tony Parker's bar fight add to the Spurs' street cred.  But to me, the most interesting quote came from guard Manu Ginobili, who admitted the end was near without completely admitting the end was near when discussing being in the final year of his contract.

“If I’m going to play next year, it’s highly likely it’s going to be here,” he said. “So I really don’t care (about this being a contract season).”

That's the first time Ginobili had made a comment like that with any sort of time frame on it.  Regardless of whether this is Manu's last year, this does mean Ginobili's role is something that's going to be replaced before too long.  The only problem is, and this isn't even taking Manu's intangibles in to account, finding the a new, elite level shooting guard is tougher now than any other time in recent history.  ESPN's Tom Haberstroh, using ESPN's NBA Rank as his basis, looked at the lack of quality shooting guards in the NBA.  Only 14 shooting guards are in the ESPN's top 100 and only two, Kobe Bryant and Dwyane Wade, are in the top 20 (Ginobili clocked in at 25).

A lot of things could be at play here, Haberstroh has several theories on why shooting guards have fallen off, including the rise of scoring point guards.  Ginobili isn't on the level of Wade and Bryant, mostly because the combination of injuries and a careful eye on his minutes limits his overall production, but he's probably still the third best shooting guard in the league depending on James Harden's development or how well Andre Iguodala fits in to the Nuggets' system.  So what happens when Manu retires?  Where do the Spurs look to replace his productivity?  We don't know enough about Nando De Colo to say he's the answer, though we can say he's not the sneaky good athlete Ginobili is.  Adam Hanga? Probably not. Danny Green? A starting two guard for sure, but he and Ginobili don't exactly have similar styles of play.

So if the Spurs have to look outside the family for a new shooting guard what are the options?  Let's assume stealing James Harden away from Oklahoma City isn't an option.  Then you start looking at names like Tyreke Evans (you could talk me in to it), Andre Iguodala (would need to opt out of his deal) or soon to be pros like Shabazz Muhammed out of UCLA and Archie Goodwin out of Kentucky.  Both guys can really score and have great motors.  Both of those guys would require the Spurs to move in to the top ten, and probably top five to draft either guy.

There's a third option and we may have seen the first glimpses of it in Las Vegas.  If Kawhi Leonard can become a go to scorer, it changes what the Spurs needs once Ginobili leaves, whether it's next summer, two summers or three summers from now.  Ginobili's words don't mean anything for the Spurs' front office. They knew this day would be coming sooner than most fans.  There's no doubt they've been planning for it. It's just another example of the challenges that await this organization in the near (but hopefully not too near) future.