We’ll be starting a new feature on Project Spurs this year. About once a week, we’ll be going into our virtual mailbag and one of our writers will answer one of your questions. Want us to answer your question? Follow this link or click on the “Contact” link at the top of the page and enter “mailbag” in the message subject. 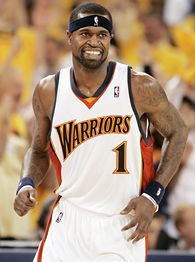 “I know Pop didnt like Stephen Jackson, but are there any chances that we could get him back to solidify our chances to definitely make it to the finals…The guy was a god raining 3’s back in 03…I know weve spent most of the MLE, but do you think a trade could be in the works?” -Samir Patel

I guess I wouldn’t mind a trade as long as we package another 2 or 3 because we’re already stockpiled at those positions. But before that even comes close to happening, Jackson would have to prove that he is mature enough to handle not being the first, second or third option and he’s have to put his ego aside in hopes of getting another ring. Speaking of his maturity or lack their of, he also needs to stop and think sometimes.  Case in point: he reiterated his demand for a trade from the Warriors during their media day!  That doesn’t fly in the Spurs organization.

I also feel like the Spurs have other weaknesses that would need to be addressed before they go out and get another swingman. Plus, if Jackson comes back to San Antonio, Manu would only be able to cross him over during practices.