The 2020-21 NBA season ended disappointingly for the San Antonio Spurs, who were given a backdoor into the playoffs, but ultimately missed out for the second consecutive season. There were not only negatives to the campaign but plenty of positives, and the season could have ended differently had certain things, which were out of Spurs’ control, went their way.

ESPN predicted a 13th place finish for the San Antonio Spurs at the start of the 2020-21 season, mostly because Spurs had halted a 22-year spell where they qualified for the playoffs. The Spurs finished fourth in the Southwest Division that season with a .451 record. That resulted in an 11th place finish in the Western Conference.

The lack of confidence shown by ESPN was mirrored by the various NBA betting sites online, with none of them giving the Spurs a chance of NBA finals glory. Three straight defeats in preseason seemed to confirm the accuracy of those predictions.

A Solid Start But The Wheels Fell Off

However, Spurs looked to be defying the odds and were 17-12 by the end of February, which placed them firmly in the fifth-sixth range in the West. Things were looking up for the Spurs, and a return to the NBA playoffs looked likely.

Everything that could have gone wrong did during the second half of the season. Spurs endured some grueling back-to-backs, consecutive spells of four games in five days, and fixtures against title contenders in quick succession. Look at May as an example, when Spurs played ten games in 14 days, including back-to-back on-the-road games against the high-flying Utah Jazz and trips to Sacramento, Portland, Brooklyn, and New York. It was unsurprising to see Spurs end May 2-8.

Despite earning the number ten seed with a 33-39 record, the Spurs were given one last chance to qualify for the playoffs with a newly formed play-in tournament. A 96-100 defeat at the hands of the Memphis Grizzlies ended any dreams of a playoff campaign, and it marked the first time in the franchise’s history that they missed out on the playoffs in consecutive seasons. 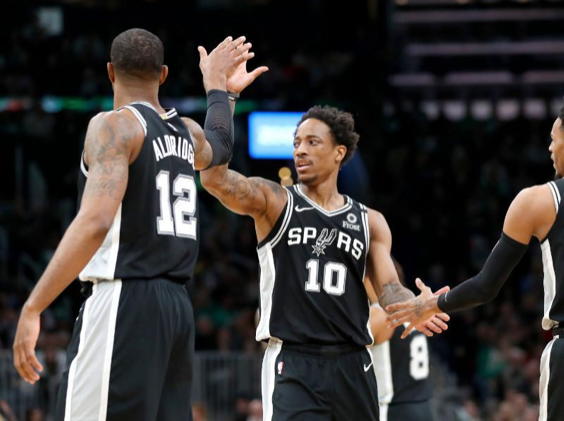 “San Antonio Spurs” by NBA is licensed under CC BY 3.0

There were plenty of positives for the Spurs to take from what was a disappointing season overall. First, the roster’s younger players began showing what they are capable of.

Dejounte Murray averaged 15.7 points, 7.1 rebounds, and 5.4 assists per game through 67 appearances. Those were his best figures since he first appeared in a Spurs jersey in 2016.

Derrick White was another youngster who put in some o his best figures yet. White averaged 15.4 points, 3.0 rebounds, and 3.5 assists last season. However, injuries limited White to only 36 games, of which he started 32.

Spurs Must Address Their Home Form

You need to put your home-court advantage to full use if you are to have any chance of glory in the NBA. Spurs failed miserably in this department, recording a 14-21 win-loss on home soil. This was Spurs’ worst home record since the 1996-97 season when Spurs only won 20 games all campaign.

Playing to an empty stadium or vastly reduced capacities did not help Spurs’ cause, but other teams were in the same situation, so you can only use that excuse so much. One thing is for sure; Spurs fans have a significant role to play when the 2021-22 season begins.

Starting a season 22-16 only to end up 33-39 shows something went drastically wrong. The schedule played a major part in the Spurs’ second-half demise, and this season’s schedule cannot be anywhere near as bad as last year. Add to the fact vaccines are winning the war against COVID, so there should be fewer game postponements, fans are allowed back into stadiums, and Spurs should massively improve during the coming season. Here is hoping.