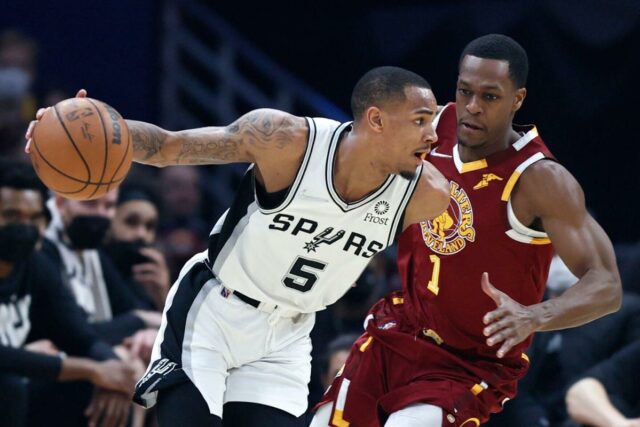 The draft will be a bit different for the San Antonio Spurs this season. The Spurs hardly ever trade their own first-round pick, but they also hardly ever receive another team’s first-round pick in a trade (Toronto’s first in 2019 after the Kawhi Leonard trade is the only recent exception). During what ended up being a much more exciting than usual trade deadline season for the Spurs, though, they acquired two extra first-round picks, one from the Toronto Raptors and one from the Boston Celtics. What is the likely range for those picks to convey? First, we’ll look at ‘standing tiers’, ranking teams in order of highest pick to lowest pick, with teams being about 2 games from each other being in the same tier, then we will use those tiers to evaluate the ranges the Spurs’ picks can fall in this season.

With less than a month left in the season, teams may move inside of their tier, but there will probably not be a lot of movement from one tier to another. There are a few exceptions that impact the Spurs’ draft pick this season. First, the Sacramento Kings exist in a weird place between Tier 3 and Tier 4 and can fluctuate between the two on any given night. Them passing the Spurs is the Spurs’ best chance at improving their lottery odds. Second, the Brooklyn Nets are much more talented than their tier suggests and now that Kevin Durant is back, they can make up large ground and break into Tier 7. Lastly, the Cleveland Cavaliers have been on a bit of a skid and can slide down into Tier 6 if their rough stretch continues.

Using these tiers we can forecast what the Spurs’ final spot in the lottery will be and where the Toronto and Boston picks could fall.

The Toronto Raptors provide an interesting case in risk aversion. It’s better for the Spurs’ pick if the Nets passed them in the play-in race, as long as the Raptors would be able to win one out of two of their play-in games. For the Spurs to get a guaranteed pick, the Raptors would need to pass the Cavaliers, but that would mean having a worse pick. The likely pick range for the pick from the Raptors is picked 16 to 19.

The Boston Celtics have the most straightforward range of all three teams. They have been playing very well lately and are sitting at the end of their tier, which means that their pick doesn’t currently have much ‘upward momentum right now. The likely range of the pick from the Celtics is picking 20 to 26.

That means the likely ranges for each of the Spurs picks is 1-4 of 6-9, 16-19, and 20-26. The Spurs have two extra picks to use in a bigger trade or use to bring two more young prospects in. Likely, though the most important determination for the Spurs is whether or not they jump into the top 4 in the lottery.