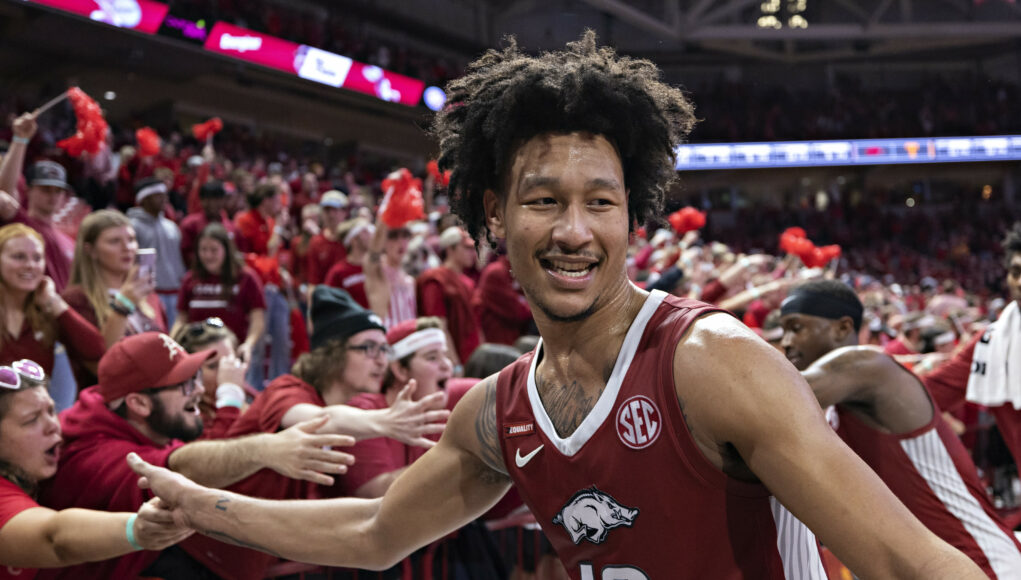 The San Antonio Spurs have secured their spot in the playoffs by essentially eliminating the Lakers from the last play-in spot. This also means the Spurs will likely move down a bit in the draft order. However, they should have plenty of options just outside the lottery and with their acquired first-round picks. One of those picks could turn out to be Arkansas big man Jaylin Williams.

The 6-foot-10, 245-pound sophomore exploded onto the scene about halfway through the season as he became a major game-changer for the Razorbacks on their way to an Elite Eight appearance. He started all but two games this season and that was because coach Eric Musselman couldn’t possibly deny the impact Williams was having on games despite not putting up eye-popping numbers. Here are those numbers on the season.

A major advantage Williams has in this draft is that despite being in his second year of college, his age is still on par with that of Chet Holmgren. The ceiling is still high for him and he teams will like that since he’s shown so much potential on defense already. He takes charges and has absolutely no regard for his body on defense. He was a top charge taker in the SEC and it doesn’t hurt that he has sticky fingers and a good rebounding instinct on defense as well.

Shooting will end up being the swing skill for the Razorback big man at the next level. He was inconsistent from three-point range and not particularly good from there. However, he’s shown promise with a decent free throw shooting percentage. He will have some mechanical fixes to make, but nothing too troubling. He’s an excellent glue guy and can score in off-ball motion as well as in the screen-and-roll game.

Williams’ defense will be his calling card as he not only draws charges well, but he moves his feet well out on the perimeter. He can’t guard all five positions, but he is more versatile than other big men in this draft class. He’s going to do the dirty work on offense and defense. Couple that with his age and flashes of offensive potential, he could entice someone in the later stages of the first round.