San Antonio Spurs fans have heard that myth over and over again dating back to when he took over as head coach in the 96-97 Spurs season.

Popovich rode Tony Parker through his rookie season, same with Antonio Daniels before that and Beno Udrih after among with several others.

People often call it “Larry Brown syndrome” after Pop’s predecessor and it looked like he caught a bad case of it in the 2009 Playoffs when he rarely played George Hill after an impressive rookie campaign, even when J.J. Barea was ripping the Spurs to shreds.

Kawhi Leonard knows nothing of that Popovich.

Not only is Leonard, who finished fourth in Rookie of the Year voting, playing big minutes in the playoffs, he’s starting.

Not too long after the Spurs sent Hill packing for the rights to Leonard in the draft, even Pop seemed surprised at his newly-drafted rookie.

He’s been called Kwame Leonard and Kuwait Leonard, but perhaps the most unfitting name for Leonard is rookie.

It didn’t take long for Leonard to make an impact on the Spurs. Playing in his first regular season game against the Memphis Grizzlies, he finished the game with six points, six rebounds and two steals in just 14 minutes. After the game, he described defending Grizzlies forward Rudy Gay as fun.

This season, he finished in double figures in 24 of 66 regular season games and had six or more rebounds in 27 games.

Through 73 games, everyone is well aware of Leonard’s defensive prowess, but the biggest knock against him when he entered the draft was his shooting, with some draft specialists calling his perimeter shot raw, limited and inconsistent. But under Spurs shooting coach Chip Engelland’s tutelage, Leonard has turned a very high and flat release into a pretty consistent shot from the outside.

Through six playoff games, Leonard is shooting at a 46 percent clip from beyond the arch, and in game three against the Los Angeles Clippers, aside from guarding Caron Butler, Nick Young and even Blake Griffin at times, he had 14 points (nine on three-pointers), nine rebounds, two steals and one block.

Regardless of his big night though, Leonard is likely the last person thinking about this game and instead thinking about the next. In fact, that could be exactly why Popovich trusts him so much. 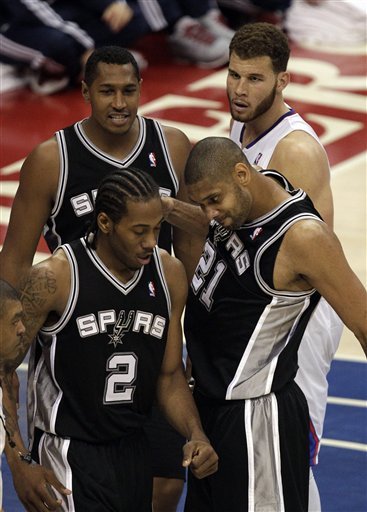 Leonard is all business and I learned that in my first interview with him this season when he was about to play these same Clippers, who at the time, we’re one of the biggest stories in the league after trading for Chris Paul. At the time, many league columnists were predicting a Clippers-Heat finals.

But when asked about playing “lob city,” Leonard gazed up at me and gave the type of answer you’d expect out of Popovich himself.

“I’m just looking forward to playing another game today, just doing what I’m told and doing my role to help the team win,” Leonard said then.

I followed that with another question to try to get a different answer and asked how he felt about defending Caron Butler and possibly trying to snare some rebounds away from Blake Griffin and DeAndre Jordan. Leonard responded by singing the company line yet again.

“Every game is a challenge, so I’m just going to go out and play my hardest these games so I can help the team out with a win.”

While those types of answers aren’t always the best to quote, I walked away after a few more questions with a new respect of Leonard and realized how lucky the Spurs were not only to get a player with his talent and upside in the Hill trade, but also a player that fit perfectly with this team without even interviewing him before the draft, and a player who is so similar to Popovich and Tim Duncan.

“Kawhi is someone who, I guess it’s fair to say surprised us because you don’t really know when you draft someone,” Popovich said. “You do your best job to research it and when that player comes in that’s when you really learn about him.”

“I don’t think he ever gets excited. He’s absolutely even keel the entire time,” he said. “I think he’s even more mellow than me if that’s possible. He just plays the same way all the time which is something you can’t teach.”

“It’s essential. You try to stay cool and collected when things are going all different directions around you. You can keep that even keel and you’re not affected by the goods and the bads as much and that’s a great quality to have.”

As Paul Garcia wrote on Friday, Popovich says Leonard just does his work and goes home. The 2011 NBA Draft’s 15th overall pick has done exactly that this series, averaging a veteran-like 11 points, seven rebounds, two steals and one block per game.

And when Leonard does come back home to San Antonio after tomorrow’s game, hopefully it’ll be with a series sweep of the Clippers after “playing just anther game.”