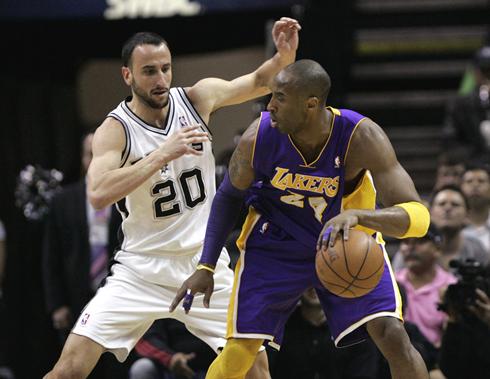 The San Antonio Spurs have had their share of tough rivalries over the last decade, including the Suns, Mavericks and Lakers.

Kobe Bryant, one of the rival team members Spurs fans love to hate most said recently the he considers the Spurs a rivalry.

Arash Markazi of ESPN LA, tweeted yesterday that Bryant only considers teams he’s lost to in the playoffs as rivals, including the Celtics, Pistons, Spurs, Jazz, Suns, Mavs and Thunder.

Of the teams listed, the Celtics, Spurs, Mavs and Thunder are still considered contenders.

There’s no doubting the Spurs and Lakers have had a big rivalry going back almost ten years ago and especially in the Kobe and Shaq days.

The Spurs’ most recent postseason win against the Lakers came in 2003, when the Spurs beat the Lakers in six games on the way to their second championship. But since 1999, the Spurs have only won two of their six postseason matchups with Los Angeles.

But can the Spurs and Lakers rekindle their rivalry this season?

The addition of Steve Nash, who has plenty of history, especially in the postseason, with the Spurs should add to that. Dwight Howard roaming the paint should also provide the Spurs some extra motivation when they visit the Lakers for their first matchup of the season on November 13.

The new look Lakers were mentioned quite a bit during media day earlier this month and while many around the league already have the Lakers penciled in in a superteam matchup with the Heat in the finals, several Spurs players have said it won’t be that easy.

“They're bigger, they're more talented. All these teams are getting all kinds of different guys but we need to be consistent in the fact that we can be a good defensive ballclub and we can build on that,” Duncan said.

“It’s tough, it’s some huge talent and all-stars that they’ve added to their squad. They’ve got work to do just like us, they have to get used to those guys, but good for them I guess,” Duncan said about the Lakers.

In a post earlier today on Project Spurs, Kyle Boenitz talked about a mailbag Manu Ginobili had on Spurs.com and mentioned Manu’s comment that adding talent doesn’t always equal being a better team.

While the Spurs fly under-the-radar for their quiet offseason news per usually with the Lakers getting the type of media attention the Heat normally get, it’ll be interesting to see who finishes on top once again and if this rivalry plays out in the playoffs at least one last time in the Duncan era.