With the MLB post season set to begin and crown a new champion within the next few weeks, a debate 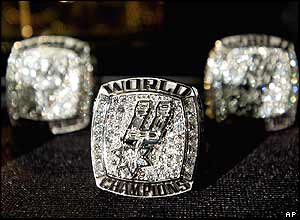 was sparked up on USA Today when this question was asked — are championship rings still regarded as the most elite prize in sports?

The article discusses players who still think their rings mean everything but a small video clip shows that after some players retire, they’re forced to sell their rings due to financial hardships.

If you even recall, Dallas Mavericks’ owner Mark Cuban said rings don’t mean that much today, the NBA should look into getting the players bracelets.

For former San Antonio Spurs guard Steve Kerr, he thinks championship rings are still some of the most prized possessions in sports.

The former guard won NBA championship rings with the Chicago Bulls and San Antonio Spurs. He has five rings to his name, and although he doesn’t wear them much, he says winning a ring might be even more important today than it was 20 or so years ago.

“There’s so much more coverage and scrutiny now,” said Kerr, who won his first ring in 1996. “So if you’re lucky enough to be a part of (a championship), it means an incredible amount to have a ring for your reputation.”

“So much of sports is about history and tradition, and the ring has always been the Holy Grail for professional athletes,” Kerr says. “The ring is here to stay.”

Should there be a 2011-12′ NBA season, let’s hope Tim Duncan can win his fifth ring, while Manu Ginobili and Tony Parker add a fourth ring.