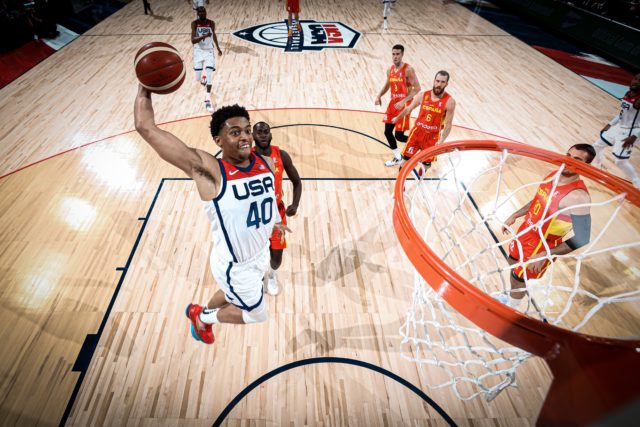 Johnson finished as the second leading scorer on Team USA with 15 points on 7-of-9 shooting. He also collected three rebounds, two steals, and had a block in the halfcourt on a drive from the opponent. He did have one turnover trying to throw an outlet pass in the open court.

In this game, Johnson showed his ability to play off the ball in being on the court with All-Stars like Kevin Durant, Damian Lillard, and Jayson Tatum. In the open court, Johnson is able to run the floor and find himself in passing lanes to finish on the break. In the halfcourt, Johnson knows how to cut off the ball and with excellent passers on Team USA, he’s able to catch and finish when attacking the rim.

“Honestly, just being active, just being a spark,” said Johnson after the game of his role on the team. “I’m out here to be that energy guy. In the third quarter, we needed a spark.”

On defense, Johnson was active in passing lanes and he was able to switch multiple positions, mainly guarding guards and wings, but also holding his own when having to switch onto bigs.

Due to FIBA only allowing five personal fouls, Johnson did foul out late in the fourth quarter, but by that point, Team USA was in the driver’s seat to hold on for the win.

“Keldon Johnson just played a really solid basketball game,” said Team USA and Spurs Head Coach Gregg Popovich after the game. “He made shots. He made cuts. He had a really really good night.”

This was the final exhibition game for Team USA before they depart for the 2020 Olympics in Tokyo. Team USA went 2-2 in exhibition play. Johnson ended up playing his most minutes Sunday (17), and after playing 13 minutes vs Australia and 14 minutes against Argentina. He played in 3 of the 4 exhibition games for Team USA.

It’ll be interesting to see if Johnson remains in the rotation once Jrue Holiday, Khris Middleton, and Devin Booker join Team USA for the Olympics.