Where DeMar DeRozan may have been snubbed from the All-Star roster, one member of the silver and black has been selected for the weekend’s festivities, though in name only.

Wednesday afternoon, the NBA announced that second-year player Keldon Johnson has been named to the Rising Stars Challenge roster, recognizing him as one of the league’s top young talents. The Rising Stars Challenge features 20 players in their first or second years, 10 of whom are international players in the league who play on Team World, against the other 10 who make up the United States team.

#NBAAllStar @Zionwilliamson of the @PelicansNBA and 2019-20 #KiaROY @JaMorant of the @memgrizz lead the list of 20 players selected by NBA assistant coaches for the 2021 NBA Rising Stars rosters!https://t.co/jDjVYSzHle pic.twitter.com/alUV6kktMF

After spending most of last season with the Austin Spurs, Johnson has become a consistent starter with San Antonio, averaging 14.3 points, 6.8 rebounds and 2.2 assists in nearly 30 minutes per game. The honor is the second time the young forward has received in his NBA career, being recognized last season in the G League as a Western Conference Midseason All G League Team selection.

According to a statement from the Spurs, “Johnson joins Zion Williamson and Michael Porter Jr. as the only three players averaging better than 14.0 points and 6.5 rebounds per game” of first and second-year players. The ninth player in Spurs’ history selected to the Rising Stars challenge, Johnson is the first Spur named to the team since Jonathan Simmons in 2017. 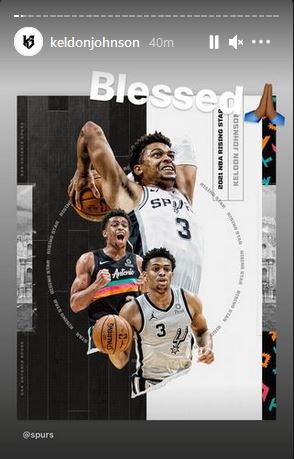 Though it’s disappointing that he won’t be able to give the Spurs recognition in an actual game on NBA All-Star Weekend, having the young talent be noticed is still a win for Spurs fans. Players are selected for the Rising Stars Challenge by NBA assistant coaches. 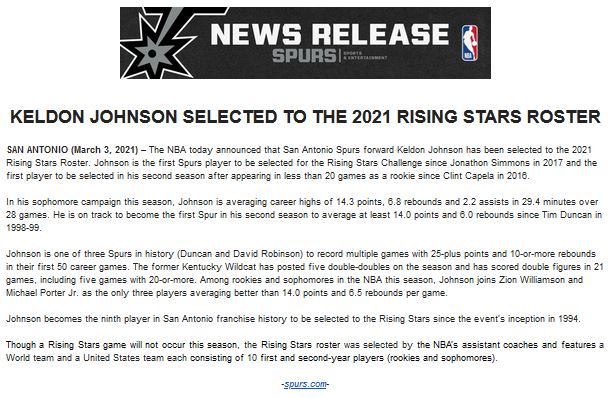