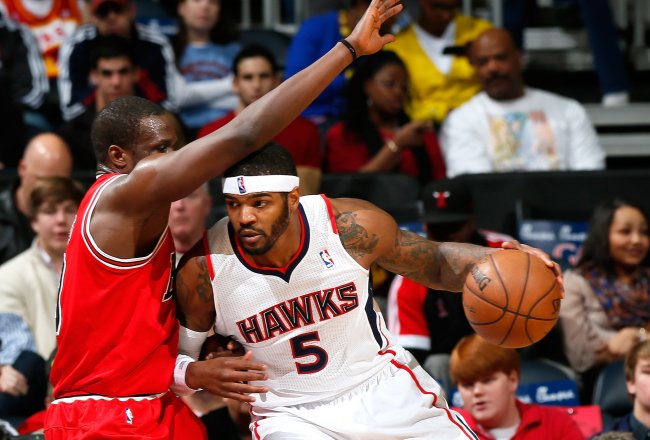 I can't remember a time when the San Antonio Spurs have been involved in trade rumors around the trade deadline.  Last year's trade swap of Richard Jefferson and Stephen Jackson was reported out of nowhere.  Now the Spurs have been mentioned in two rumors for two big names in less than a week.  First it was Al Jefferson and yesterday it was Josh Smith.  It's important to say that these are just rumors and probably aren't going anywhere, but in an attempt to keep an open mind about the roster flaws of the league's number one team (record wise anyway) and have a little fun. Here goes nothing!

Josh Smith for Stephen Jackson and Tiago Splitter: Look, if any deal involving Josh Smith and the Spurs goes down, I'd be stunned if it didn't involve both Jack and Splitter.  The numbers make sense, the Hawks keep the bulk of their cap flexibility and get a talented center in Splitter that allows Al Horford to move to power forward.

Is it worth it for the Spurs?

Short term it probably would be, because Josh Smith is clearly a better player than Tiago Splitter.  He's a better defender and is able to play both forward positions on both sides of the ball.  Having said that, he's at worst the third best free agent available this summer.  If we assume Chris Paul and Dwight Howard are staying in LA, then he's the best free agent most likely to sign with another team.  That means teams with cap space could give Smith a max offer and it's not clear he'd re-sign with the Spurs even if they decided to give him a max deal.

Smith for Jackson, Matt Bonner and Nando De Colo: This would be the no brainer of no brainer deals.  It would also take Danny Ferry giving the Spurs a Pau Gasol, Lakers-Grizzlies deal.  Keeping Splitter and picking up Smith would give the Spurs one of the most dynamic and versatile front courts in the league.  Still, from a basketball perspective it doesn't make a ton of sense for Atlanta unless someone like Davis Bertans is also involved in the deal (and yeah, I'd still do that).

Three way deal between the San Antonio Spurs, Indiana Pacers and Atlanta Hawks: He he he he.