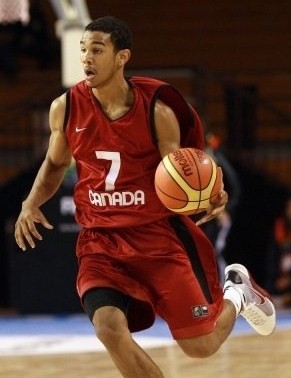 So how did he do Spurs fans? Here is the recap.

On offense Joseph had his struggles as he scored three points but missed the majority of his shots and had a few turnovers. However, defensively, you can see why the Spurs decided to roll the dice and take him in the first round.

Canada was leading 14 to 8 in the first quarter. While Joseph was on the floor in the first quarter, he hit a 14-foot baseline jumper. Joseph turned the ball over twice on consecutive possessions as he threw a pass too short and then tried to attack versus two Belgian defenders, but the ball ended up out of bounds. Next, Joseph shot a wide-open three pointer and missed. The Canadians led 16 to 11 at the end of the first quarter.

Joseph started the second quarter but then was benched when Belgium tied the game at 16. One thing I saw, Joseph is able to play one-on-one defense full court very well. He gave the Belgian point guard fits as he tried to shake Joseph off of him.

Joseph didn’t start the second half but when he was inserted in the third quarter, and Canada was leading 46 to 39. On offense, Joseph lost the ball as he tried to create, but defensively he’s very quick at fighting through screens and not letting his man get loose.

Joseph continued the defensive performance as he stole a pass using his blind side instincts. Joseph then set up Jesse Young with a beautiful two handed give-and-go between two defenders.

Joseph would miss another open three pointer but his one-on-one defense continued to bother Belgium’s point guard. Joseph routinely plays full court defense after every possession, this is a good thing and Spurs coach Gregg Popovich will enjoy this aspect of Joseph’s game. Canada would go into the fourth quarter leading 55 to 42.

Joseph started the fourth quarter and got the crowd in an uproar with a defensive play. A Belgian guard stripped the ball and went down court for a layup. Joseph was in pursuit and blocked his shot downward into the stands.

Following, Joseph inbounded the ball from one end of the court to the other and used his speed to zip by the Belgian’s defense. The Belgians had to foul Joseph and he went on to make 1 of 2 free throws. He would be sent to the bench with five minutes remaining in the game and Canada leading 63 to 52.

Surprisingly, Canada’s coach Leo Rautins put Joseph back in the game with under a minute remaining. Joseph committed a mental error as he fouled Belgium’s guard on the three point line. New York Knicks’ Andy Rautins put the game away with free throws as the Canadians held on to win 79 to 74.

After the game, Andy Rautins told a Canadian report, “We’re the leaders of the team,” referring to himself, Miami’s Joel Anthony and Joseph as the three NBA players on the team who need to lead by example.

Canada will play Belgium once more tomorrow to wrap up the Donohue classic in Hamilton, Ontario.