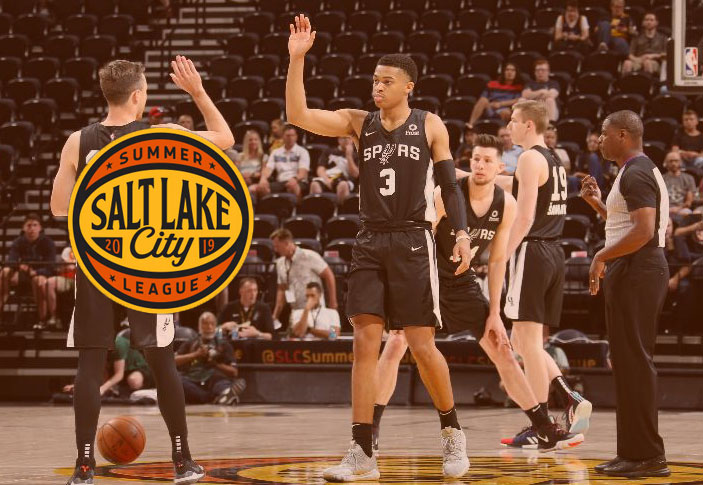 With Lonnie Walker IV, Drew Eubanks and Quinndary Weatherspoon all sitting out for tonight’s second game of the Salt Lake City Summer League against the Memphis Grizzlies, it became clear that San Antonio Spurs first round draft picks Luka Samanic and Keldon Johnson would have plenty of opportunities.

Johnson made the most of them, posting 29 points and leading the Summer Spurs to a 99-84 win over the Grizzlies. He also added seven rebounds and three steals and showed off not only a silky jumper, making 10-of-17 shots from the field and three of his four three-point attempts, but he also showed off a keen awareness on defense and a relentless motor that allowed him to stay in plays and clean up missed shots at the rim.

His 6-9 wingspan allows him to compete with much bigger players for rebounds and is similar to Spurs guard Dejounte Murray in that manner. He seemed to be on the right side of 50-50 balls all night. Tonight’s game is a big improvement over his first game, a win over the Cleveland Cavaliers, and he was able to put up some shots from deep, which he wasn’t able to do last night.

Some were quick to get the anointing oils out with Samanic after his 11 point, seven rebound game last night, but the rookie struggled tonight. He finished with nine points, four rebounds and three assists in just under 25 minutes against the Grizzlies.

He shot 2-of-9 from the field and made just one of his five three-point attempts. There is a lot to like when watching Samanic, but it’s definitely going to be a process. He is still very young. In two games, he has struggled with turnovers and almost always gets swiped when he tries to dribble into the paint.

He will also need to work on his decision making a bit. He was passing up open jumpers from outside several times, opting to drive, where he would either turn over the ball or force up a shot. Once he spends some time with the Spurs’ strength and conditioning department and gets more games in, he’ll likely begin to make adjustments, but he seems to have a nice overall feel for the game, and he has made some impressive precision passes and moves around the floor well.

Ben Moore had another solid game for the Spurs, finishing with 16 points and seven rebounds. Like Johnson, his motor has been impressive. Jeff Ledbetter, who has been with the Spurs’ summer league team over the past few years and has also spent several years in Austin, led the Spurs on a furious rally in the second and third quarters, scoring 15 points as he knocked down five three-pointers. He was one of four scorers who finished in double figures for San Antonio.

Thomas Robinson had 14 points, seven rebounds, and four assists, and one player to keep an eye on is Josh Maggette. While he couldn’t get his shot going, he’s been a solid distributor through two games for the Spurs. He could easily end up playing in Austin once Summer League is over.

The Summer Spurs will look to go 3-0 as they finish up play in the Salt Lake City Summer League tomorrow night against the Jazz at 8 p.m. on NBA TV.