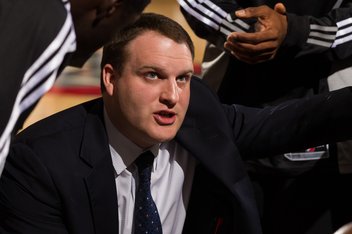 Usually D-League players are the ones that get called up to the NBA, but Toros coach Taylor Jenkins will be recieving his "call-up" of sorts as he leaves the Toros, where he's coached the last five years, to join former San Antonio Spurs top assistant Mike Budenholzer's staff in Atlanta.

“Taylor is a talented, hard-working coach who has a great grasp of the system that we are going to implement," Budenholzer said. “He gained valuable experience working in the NBA Development League the past five seasons and with his attention to detail and energy, he will be an asset to my staff.”

Jenkins was an assistant under both Quin Snyder and Brad Jones, before being promoted to head coach before last season. Jenkins is now the third consecutive Toros head coach to get promoted to an NBA coaching position after Snyder left for Philadelphia and Jones went to Utah last year.

Jenkins and Budenholzer have worked closely before, and in fact as recently as the NBA Finals. According to Ridiculous Upside, Budenholzer put Jenkins in the role of an advanced scout throughout the Finals.

Jenkins should find himself comfortable in a new system with Atlanta, especially if Budenholzer keeps or uses some of the same Spurs offensive and defensive schemes, since Jenkins ran the same system in Austin. Aside from that, he'll also be working under a familiar face in GM Danny Ferry, who worked directly with the Toros in his last stint with the Spurs.

While the Spurs likely have several options to replace the vacant head coaching position, assistant Ken McDonald seems the most obvious choice and a good fit. After coaching under Rick Barnes at Texas, McDonald coached current NBA players Courtney Lee and Jeremy Evans in two successful runs in the NCAA Tournament with Western Kentucky. He has the experience and excelled in player development with the Hilltoppers, so he should be able to transition into a head coaching position rather smoothly.