With the final seconds ticking away in game four of the 2007 NBA Finals, the San Antonio Spurs 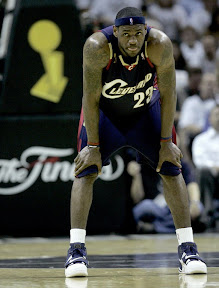 won their fourth NBA championship by sweeping LeBron James and the Cleveland Cavaliers.

Four years later, the four-game sweep by the Spurs still motivates James as he will get his second chance to capture an NBA title this time with the Miami Heat.

“I think about it all the time,” James said of the 2007 series. “I even go back and watch some of those games and see how I wasn’t that good of a player, especially on both ends of the floor. You just try to use those moments. I feel like there’s no way I should be out on the floor and the team that I’m on can’t win a game in a series. I use that as motivation…. I’ve got a lot of motivation.”

That title was the last NBA championship for San Antonio and now the Spurs are picking up the pieces from another disappointing playoff run, this time it was an upset first round series loss at the hands of the Memphis Grizzlies.

James has gone on to be villainized by some NBA fans (especially Cleveland fans) for his departure from Cleveland, win MVP awards, and now on the verge of winning his first title.

Perhaps the Spurs should also look back at the 2007 NBA Finals footage for motivation to get back to a defense first mindset. That team was predicated on defense – unlike this past season’s team – and completely dominated a team with fundamentals, team defense, and were able to play a complete four quarters of playoff basketball. Something we did not see in this short playoff run.