James Naismith: The Man Who Gave Us Basketball 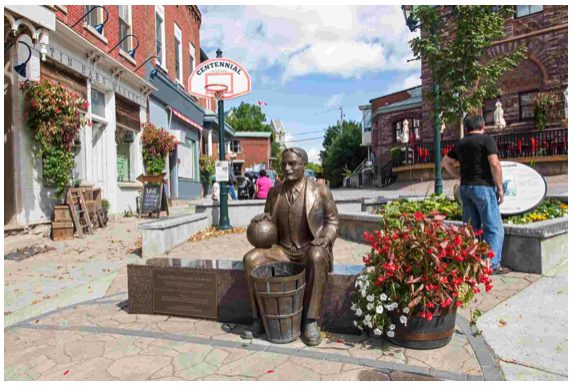 Basketball has a long history in the US and beyond. But who was the man behind the game? It is difficult to comprehend that someone sat down and invented an international sport, yet this is exactly what James Naismith did for basketball in 1891.

Who is James Naismith?

James Naismith was a college instructor at Springfield College in New England. He was born on November 6th 1861 in Alamonte, Ontario, Canada. He dies some 78 years later in Kansas. He was an instructor in physical education and is best known as the man who worked at the International Young Men’s Christian Association (YMCA) and invented basketball. At the time Naismith was only 31 and a graduate student. He came to Springfield College to learn how to be a physical education instructor under Luther Halsey Gullick. Gullick has since been coined the father of PE and recreation in the US.

He wrote the first basketball rulebook and later established the basketball program at the University of Kansas. He was also the designer of the first football helmet.

New England winters are harsh and any sort of outdoor exercise impossible. Therefore, the director of sports laid down the challenge to Naismith to create a game that would burn off some energy in the gymnasium. Gym work at this time included marching and apparatus work when outdoor games seemed more exciting with football and lacrosse. However, can you mimic the energy of these outdoor games inside the comfort of the gym?

The only instruction Naismith was given was that the game should be fair to all players and not be too rough. He was told by Gullick that the game should be interesting, easy to learn and play and could be enjoyed in the winter under artificial light. For a second-year graduate student, this was quite the challenge and his mind spark with inspiration.

From this inspiration, basketball was born in this 1891 winter to keep the students motivated to enjoy keeping fit.

Where the inspiration came from

While others in the faculty had tried to interest the students little was working to inspire the lads at the college to exercise. Naismith was clear that it was not the fault of these students but the structures they had in place. It was up to the faculty to devise the inspiration for exercise, and so he was landed with the role. It might not have quite happened like this but Naismith did present himself as someone willing to try to find a solution.

As it was an indoor game it could not be as rough as lacrosse and football, which could result in significant injury. So, Naismith looked to lots of other sports for his plan. He took passing from American rugby and the jump ball from English rugby. He used a goal from lacrosse and a ball of similar size and shape to a soccer ball. However, the signature hoop came from a childhood game called Duck on a Rock. The idea of this game is that you could not rush the goal to score. The ball had to be placed into the goal. Hence, the horizontal opening high above the ground so that the ball would have to be tossed with skill, rather than just thrown.

Of all the features of basketball that are distinctive, it is the “basket”. Naismith asked for boxes and the janitor came back with peach baskets instead. Naismith nailed these to the rail of the gymnasium balcony and the first basketball hoop was created.

The regulations around basketball might run to volumes now, but in that gym, in the winter of 1891, there were just 13 rules as written by Naismith. The rules were:

1. The ball may be thrown in any direction with one of both hands

2. The ball may be batted in any direction with your hand but never your fist

3. You cannot run with the ball, you must catch, stop and throw

4. The ball must be between the hands, the arms and body must not be involved in the holding of the ball

5. No physical contact, infringement shall count as a foul – once results in a warning and twice results in removal from the game with no substitute allowed

6. A foul is striking at the ball with the fist

7. Three consecutive fouls shall count as a goal for the opponent

8. A goal is when the ball is thrown or batted into the basket. If the opponents disturb the basket it will still count as a goal.

9. When the ball goes out of bounds it shall be thrown back in by the person touching it. If there is dispute, the referee will throw the ball straight into the court. If the player holds the ball for more than 5 seconds the opponent gets to return the ball.

10. An umpire will keep a record of the fouls and notify the referee of three consecutive offences. He will also be able to disqualify a player for physical contact.

12. The game will have two 15-minute halves with a 5-minute rest in between.

13. The side with the most goals wins.

Naismith laid out how the ball should be moved and what constituted a foul, in a basic sense. He asked that a secretary type up the full version of these rules and then asked the students to meet him in gym class. The teams were chosen with three centers, three forwards and three guards per side. When two of the centers met in the middle and the ball was tossed in the air by Naismith, we had our first game of basketball.

But how did it catch on

There was only word of mouth in the 19th century to drive the success of this new game. However, still, this word spread like wildfire and within weeks it was being played in other YMCA gyms across the state. The rules were printed in the Springfield College magazine and some were posted to other YMCAs around the whole country.  With so many international students at the New England college, word of the game passed to foreign nations quickly too. It took only 14 years for the sport to be recognised as the official winter sport.