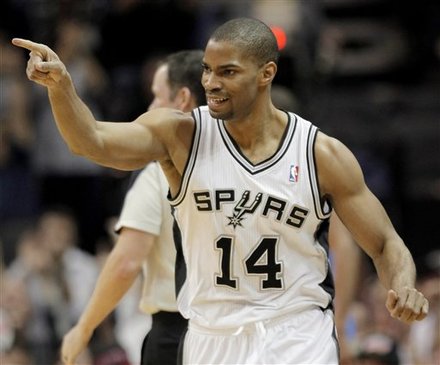 The San Antonio Spurs have the third best record in the Western Conference (25-8) and are only a half game behind the Oklahoma City Thunder and Los Angeles Clippers for the top spot.  They've been rolling lately after losing four of five in an absolute murderous stretch of the schedule.  So overall, they're in pretty good shape.

Their defense has also improved (eighth in opponents field goal percentage, second in opponents three point percentage), but it feels like they still have the same concerns as last season.  They're not athletic enough, yada, yada, yada.  With that in mind, if the Spurs were to make a move, who would be the most likely suspect to go?  It's easy to say DeJuan Blair because so often he seems like the odd man out in the big man rotation.  Only problem is the Spurs tried and couldn't find a deal they liked for Blair last summer (things can change of course).

Despite his increased role while Kawhi Leonard and Stephen Jackson are out, I think that guy is Gary Neal.  This opinion actually has less to do with Neal and more to do with the development of the Spurs other guards not named Parker and Ginobili.  As Kyle Boenitz touched on earlier this week, the Spurs are trusting Danny Green to shoot much more this season then last, regardless of whether he has an off night shooting.  Often times last year games ended with Neal out on the court with Parker, Duncan, Ginobili and either Leonard or another big.  This season Green has been out there just as often as Neal and has hit some big shots (see: game winner in Kobe's eye).

Danny Green is also a much better defensive player than Neal, specifically defending the pick and roll ball handler. Green's defensive numbers won't bowl you over by any means, but Neal's numbers show he's a liability.  Additionally, while people think of Neal as a great shooter, the numbers show he is just a good shooter, especially from long range.  He's excellent from mid-range and in the paint.  However, Green's numbers are better than Neal's in every area of the court except inside the paint but outside the restricted area.  Green's development as a mid-range shooter cannot be overlooked, as his offensive game looks down right J.J. Reddick-esque when his shots are falling.

Before all the injuries, Neal started the season as Parker's back up, even though he's not a great facilitator and really shouldn't dribble if a defender is within like 12 feet of him and there's no one to set a screen.  However, Nando De Colo and Patty Mills' recent play shows that both could be competent to good back ups to Parker and both have shown an ability to play alongside Manu Ginobili, who is the primary ball handler in the Spurs' second unit.

Generally speaking, I like Gary Neal.  He's possibly the ballsiest shooter the Spurs have ever had and has hit some big shots for the Spurs.  He's also gotten better as an all around scorer, but the rest of his game hasn't really improved.  If he can be moved in a package for a big guy or even a first round pick, I'm all for it.  If not, well then I guess I'll have a lot more "WAIT, DON'T SHOOT THA-Oh cool, good shot Gary Neal" moments as the season moves on.