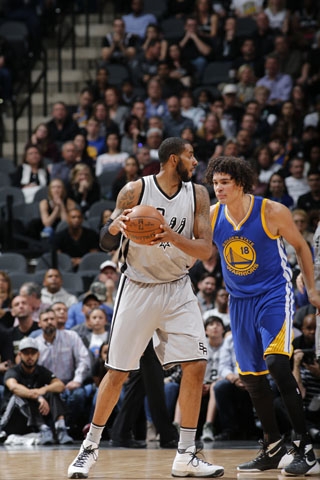 The Golden State Warriors turned the game of basketball on its head when they decided smaller was better. Big men had long dominated this game where height is seen as an advantage, but the Warriors’ successful style has put an emphasis on quickness, 3-point shooting, and versatility. The rest of the league seems to be chasing the small ball gods of Golden State, but there’s at least one team heading in a different direction. It might not be a bad idea either.

San Antonio Spurs Head Coach Gregg Popovich has been zigging while others zag for his entire career. His unique approach to things is possible in part because he doesn’t care about optics, so long as he achieves the desired result. He tanked for Tim Duncan in his first year. He traded a beloved teammate in George Hill for Kawhi Leonard on draft night back in 2011. In the analytics driven age where mid-range jumpers are seen as inefficient, he sees buckets. It should come as no surprise that in a small ball league, Pop is going big.

After Golden State proved that a jump shooting team could win a championship, the Spurs landed that summer’s biggest (emphasis on big) free agent in LaMarcus Aldridge. The tandem of Aldridge and Kawhi Leonard carried San Antonio to a franchise record 67 wins, but they fell short of their ultimate goal last season.

Shooting wasn’t the problem; it was the dominant interior play of Oklahoma City. Duncan might have been too old, and Boris Diaw and David West didn’t have the size or verticality to compete with Steven Adams and Enes Kanter. Duncan, Diaw, and West are now gone, replaced by Pau Gasol and more athletic players like David Lee and Dewayne Dedmon.

The Warriors blew a 3-1 lead in the NBA Finals, and the 73-win team managed to replace Harrison Barnes with Kevin Durant. The Dubs somehow got better, and Death Ball somehow got death-ier. Speculation that chemistry will be an issue for Golden State comes from a faint hope that they won’t lay waste to the rest of the NBA. The scary reality for everyone outside of the bay area is that Stephen Curry, Klay Thompson, Durant and Draymond Green are the four horsemen of the basketball apocalypse.

That quartet of superstars could win a title with possibly any fifth human on the floor. Conventional wisdom would suggest that fifth human be on the taller side, someone like Zaza Pachulia who signed a team friendly deal to be the number one traditional center on the depth chart. Pachulia will play and likely start, but the Warriors will also play the enhanced death ball lineup of Curry, Thompson, Andre Iguodala, Durant, and Green.

Small ball is dangerous, but not because it’s small. The uniquely skilled personnel package allows Warriors Head Coach Steve Kerr to run a spread out, fast paced motion offense that emphasizes creating high efficiency looks for talented scorers. It works on the defensive end because each player in the unit has the ability to defend multiple positions, allowing for complex switching schemes.

At its core, small ball isn’t about size. It’s about speed, skill, shooting, and versatility. The Spurs’ starting lineup maintains a lot of those elements while staying big. Aldridge and Gasol form one of the most imposing frontcourt duos in the league. Each brings a wide array of post moves in addition to adequate 3 point shooting range and a keen eye for passing out of the post to open shooters and cutters.

Gasol has said that the Spurs should take advantage of their strength down low, and they absolutely should. It will be difficult to defend the dual threat of Aldridge and Gasol, especially because they’re both so versatile. Expect the San Antonio offense to use these big men not only as scorers, but also as facilitators from the inside out. They’re both excellent pick and pop options as well.

Last year, Duncan would receive a pass at the top of the key and not even look at the rim, allowing defenders to sag off and clog the paint. Aldridge and Gasol probably won’t light it up from downtown, but they don’t have to. Each has the ability to knock down an open 3 in the flow of the offense, which forces defenders to respect them at the arc and spreads the floor, creating space for Leonard and others to attack.

Aldridge didn’t shoot many 3’s at all last year, but now he’s more comfortable in the system and ready for an expanded role. Both he and Coach Pop have said that the plan includes more attempts from long range for the 6’11” power forward, and Aldridge has been getting reps in so he’s ready to execute that plan.

Aldridge getting up those 3s today …said yesterday he plans to shoot them more this season #Spurs pic.twitter.com/tN7yochxjn

Is this the answer for Golden State’s small ball lineup? Maybe, maybe not. Gasol is 36, and he struggles to defend one on one in open space. The Spurs can go small instead, with Aldridge at center, Leonard at the 4, and Jonathon Simmons at small forward. Danny Green’s defensive prowess will be important, but there are questions about whether or not Tony Parker can keep up on that end of the floor at 34.

The Spurs have also been experimenting with ‘Tall Ball’ lineups in the preseason. Leonard plays shooting guard, usually with 6’9” Kyle Anderson at the 3 and Ginobili running the point. Most teams don’t have the personnel to match up, and this creates mismatches all over the floor. Leonard can abuse smaller defenders with post-ups and pick and rolls, often drawing a double team which creates open looks for others. The bigs can space the floor perfectly, getting out of his way and moving further from the basket where they are still scoring threats.

A lineup like this is slower, but it can be tweaked to include the youth and athleticism that the Spurs brought in this summer. 6’5” Dejounte Murray is a promising and explosive point guard, nearly 20 years younger than Ginobili. Davis Bertans is a tall combo forward, deadly from beyond the arc and quicker than Anderson. Dedmon is an excellent rim protector and roll man with impressive hops at the center position.

The Spurs aren’t trying to beat the Warriors at their own game, probably because they know that it can’t be done. Coach Popovich and General Manager R.C. Buford have built a team around talented big men, but it’s the versatility of those players that makes them so dangerous. The starting unit has a wide array of attacking options, just as Pop has a wide array of personnel options with which to counter Golden State’s potent Death Ball lineup. We’ll see how it plays out when the Spurs open the regular season in Oracle Arena on October 25th.