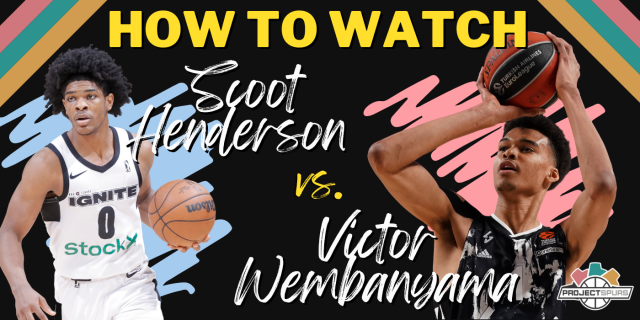 San Antonio Spurs fans are bracing for the worst season in franchise history. The light at the end of the tunnel, however, is the prospect of being one of the three teams in the spring with the best odds to land the top pick in the 2023 NBA Draft. Already this fall, with the college basketball season a month away yet, there is a general consensus on the battle for the top spot. It comes down to Victor Wembanyama against Scoot Henderson.

Following the hype, the NBA G League and the NBA are bringing fans an early look at the two young stars in a pair of exhibition games. While the schedule may read NBA G League Ignite vs Boulogne-Levallois Metropolitans 92, the two-game series will be known widely as “Victor Wembanyama vs Scoot Henderson”.

How to Watch Victor Wembanyama vs Scoot Henderson


If you are new to the hype around Victor Wembanyama and Scoot Henderson, it is understandable. Most NBA fanbases likely won’t have a shot at acquiring either of them via the draft, and those that do have a long way to go and may not want to get their hopes up. If you have questions about why this matchup is so big, we’ll try to help you here.

Who is Victor Wembanyama?

At 18 years old, Wembanyama is one of the most interesting basketball prospects in the last 20 years. While some like Zion Williamson and Anthony Davis may have gone viral for their athletic ability and dunks, this French prodigy is something else entirely. Reported heights for Wembanyama range from 7’2” to 7’5”, putting him in Shaquille O’Neal territory. Where Shaq was dominant due to his mass and ability to crash the boards with force, Wembanyama traverses the floor with almost flow and grace, but still throws it down.

In the Project Spurs Prospect Watch on Wembanyama, prospect analyst Ben Bornstein described him as, “moving and shooting like Kevin Durant while being able to play defense like Rudy Gobert.” These will certainly be the attributes that fans and analysts alike will be watching for against the Ignite squad full of elite young prospects, led by the second-ranked prospect Henderson.

Who is Scoot Henderson?

In stark contrast to the big man, Henderson is a 6’3” point guard who finished his high school career as the 11th ranked prospect in the Class of 2021. His options included Kansas, Xavier, Texas Tech, and Florida, but he ultimately elected to turn pro and join the G League Ignite. Henderson shined in his first season with the squad, averaging 14.7 points per game. A complete player, he pulled down 4.7 rebounds on average, dishing out 4.9 assists and snagging 1.5 steals per outing.

Bornstein’s report on Henderson lists Russell Westbrook and Derrick Rose as comparisons, representing a high ceiling. Similar to Wembanyama, the only knock against him is his perimeter shooting. How his inside game measures up against the Flying Frenchman’s defense, however, will be the question on everyone’s mind.

What is the G League Ignite?

The G League Ignite is an alternative to the NCAA for basketball prospects coming out of high school. At the time of its creation in 2020, one of the highlight incentives was the opportunity for players to earn financially off of their image and likeness. Of course, the athletes had the opportunity to show on the court what they could do against professional-level talent and be more effectively scouted by NBA squads.

After getting off to a slow start in its first season, the G League Ignite has started to see results in the NBA Draft. The 2021 draft saw the first three players from the program to be selected all go early. Jalen Green led the class as the second-overall pick by the Houston Rockets, followed by Jonathan Kuminga (7th) and Isaiah Todd (31st). Three more players were taken in this summer’s draft, highlighted by Dyson Daniels going eighth overall to the New Orleans Pelicans. The Milwaukee Bucks took MarJon Beauchamp at 24th, and the Dallas Mavericks selected Jaden Hardy in the second round, bringing the Ignite draft total to six.