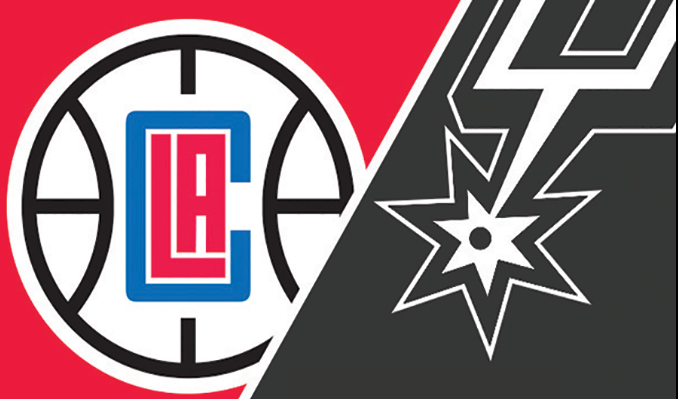 The San Antonio Spurs open the Rodeo Road Trip with back-to-back games, one against each of the Los Angeles teams, who are also the top two teams in the Western Conference standings. With every game vital as they scrap for the last playoff spot, the Spurs need to go into LA looking for wins, regardless of the gap between them and their opponents in the standings.

The Clippers and the Lakers have both elite talent and effective role players. If at full strength (Paul George has recently been out for a hamstring injury, and Kawhi continues his load management), both teams feature two top-20, maybe top-15 players; the Spurs simply don’t have comparable star power. Instead, San Antonio will need to rely on careful game planning and sound execution to nullify their opponents’ strengths and expose their weaknesses.

Despite noticeably different styles of play, the two LA teams have some similar foundations to their success. In particular, their defenses will make San Antonio pay for careless decision-making.

The Lakers are fifth in overall defense and third in scoring points off of turnovers, while the Clippers are sixth in both. The Spurs ballhandlers, if unable to get past the opposing perimeter defenders, need to make quick, simple passes to move the ball. Indecision can get them caught in no-man’s land without a good look at the rim and with the defenders swarming the passing lanes:

The Spurs must avoid mistakes to stay in the game against the LA teams. Beyond that, they need to seek out areas and situations on the court where they can generate advantages.

Does the Clippers’ Defense Have a Weak Spot?

The Clippers can play four elite defenders in Patrick Beverley, Kawhi, Paul George, and Moe Harkless. They may be the only team that has so many players with the quickness, strength, and skills to match up against DeRozan. He is averaging almost 23 points in their three previous games this year, but 3.3 assists and 4.3 turnovers per game reveal the difficulty he has had in breaking down the Clippers’ defense.

Against such good perimeter players, the Spurs may look to attack with Aldridge against Ivica Zubac and Montrezl Harrell. Zubac is a solid rim protector (27th among 96 qualifying centers in opponent shooting percentage at the rim) but is limited on the perimeter against switches:

The Spurs should be able to force switches because of LaMarcus’s threat to shoot 3s on the pick and pop, and doing so will draw Zubac away from the rim and give other Spurs the chance to attack.

Harrell, is more mobile and a highly improved pick-and-roll defender, but his limited size makes him less of a deterrent at the rim. Aldridge will be able to get through him or shoot over him in the post, and both Aldridge and Poeltl can exploit the undersized Harrell by crashing for offensive rebounds.

When the Spurs do find a gap in the defense, they can take advantage of the Clippers’ aggression with good ball movement from side to side. The Clippers will aggressively send help – look how far over the weak side defenders are, allowing Gary Harris (at the bottom of the picture) to make a catch-and-shoot three:

However, LA can often get away with that because they have such athletic, rangy wing defenders, so passes will need to be quick and accurate to exploit the help defense.

When possible, the Spurs should look to attack early in the shot clock. The Clippers’ defensive talent is magnified when they have the chance to set themselves and find their ideal defensive matchups. On the other hand, Spurs players such as DeRozan, Murray, and White thrive when they exploit a creases and mismatches in the beginning of halfcourt possessions, before the defense is set.

The Clippers’ primary offensive engine needs no introduction to Spurs fans. However, his offensive game has expanded even further since he left San Antonio. Now averaging over 27 points and five assists a game, Leonard’s improved playmaking led to his first career triple-double, notched against the Heat in January.

So while the Spurs should look to get the ball out of Leonard’s hands, doing so when he has nearby teammates in position to score exposes the defense to his passing game. If double-teamed at the top of the arc, Leonard’s size makes it easy for him to see and hit the cutting screener:

Trapping Leonard closer to halfcourt will force him to give up the ball in less threatening positions. While this could stretch San Antonio’s defense, guarding offenses of this caliber requires a defense to pick their poison. If the Clippers’ offense has a weakness it is a lack of elite passers who will move the ball fast enough to cut apart a rotating defense.

San Antonio may also rely on its zone defense challenge LA to pass around them and find open shooters. LA has numerous solid shooters that could exploit a zone defense, but having defenders in better position to help against Kawhi and Paul George may be a worthwhile tradeoff for the Spurs, especially given their lack of wing defenders who can individually match the size and strength of the Clipper stars.

The second night of the back-to-back pits the Spurs against arguably the league’s most exciting superstar pairing, Lebron James and Anthony Davis. Despite Davis’ talents, the Lakers offense has required James on the floor this year to keep it running at an above-average rate – but those LeBron minutes can be deadly for opponents.

The Spurs need to strike the balance between slowing LeBron’s own scoring threat while restricting the open looks he generates for others. Despite his genius playmaking abilities, this season’s numbers suggest that neutralizing his scoring should be the first priority; LeBron actually has averaged more assists, but a lower shooting percentage, in the Lakers’ losses.

The most significant differences are Lebron’s lower percentages from three and at the rim during losses. His outside shooting will naturally vary largely based on luck, but the Spurs’ big men can affect his shooting at the rim. Both Poeltl and Aldridge are top-15 in blocks this year, and challenging James while refraining from fouling will be essential to prevent him from running the score up with easy layups.

If the Spurs are able to slow LeBron’s scoring, he is still the most dangerous playmaker in the league. He perfectly anticipates which shooters will be open if the defense rotates a certain way, and delivers fast, accurate passes. This sloppy Spurs rotation, with DeMar helping late, no one covering his man, and LaMarcus too far from the basket to affect the play, is the type of mistake that LeBron will punish mercilessly.

If the Spurs can limit James’ scoring and assisting – easier said than done – they still need to find ways to score against the league’s fifth-best defense and leaders in blocks per game. The Lakers almost always play a traditional center – JaVale McGee or Dwight Howard – alongside Anthony Davis. This makes attacking the rim a difficult proposition without drawing out the Lakers’ big men first.

The Spurs can accomplish this with their bigs spacing the floor; Aldridge’s recent three-point bursts will help decongest the lane, and Trey Lyles is a willing outside shooter despite mediocre percentages. Additionally, a high pick-and-roll can expose the Laker centers’ limited quickness:

They can’t afford to drop all the way back to the rim, given the Spurs’ guards ability to hit the midrange, but Howard and McGee will struggle to corral the ballhandlers so far from the basket.

While the LA teams are favored coming into next week’s matchups, victories against the Jazz, Bucks, and other top teams have shown the Spurs’ ability to defeat any opponent with a well-executed game plan. The Spurs will need superb execution and some luck, but they will be going to LA believing they can win. Given their position in the standings, stealing a win or two in LA could be essential to keeping their playoff appearance streak alive.