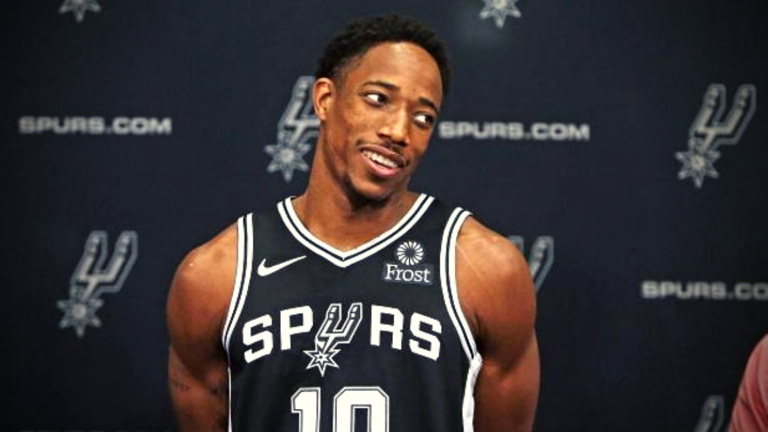 Since February’s trade deadline, many have discussed the possibility of the San Antonio Spurs and DeMar DeRozan working on a sign-and-trade this off-season. At a high level, it makes sense for both sides. Not many teams are projecting to have cap space this summer, and this would allow DeRozan to have some say over where he would be traded.

If the Spurs don’t make the playoffs this season, it’s unlikely that they will return to playoff contention next season, and this could be DeRozan’s last chance for a long term deal with a playoff team. This scenario would be beneficial to the Spurs as well as they would still get assets if DeRozan decides that he wants to leave this off-season.

But how do sign-and-trades work and what are the rules behind them? According to Larry Coon’s CBA FAQ there are two conditions for signing-and-trading a player that I can see making a sign and trade difficult for the Spurs and DeRozan, logistically.

First, a player who is signed and then immediately traded must be signed to a contract for three or four seasons. The first season of the contract is the only season that is required to be guaranteed, but it’s hard to imagine that DeRozan would sign a contract with large amounts of non-guaranteed money involved. This means that any team that is receiving DeRozan in a sign-and-trade would need to be willing to sign him long term.

Second, a team that trades for DeRozan would be hard-capped at the tax apron ($6 million above the luxury tax line). This means that if DeRozan is traded to a team that ends up over the tax, that team would have limited flexibility to add to their roster without making more trades to cut salary for the rest of the season.

Another thing to keep in mind is that a team over the cap would have to match salaries to trade for DeRozan. Depending on what DeRozan is interested in signing for, it may be difficult to find a team that would be willing to trade at least $20 million in salary to receive DeRozan unless the Spurs were willing to take on “bad” contracts with draft assets or young players included in the deal.

While a sign-and-trade does seem to make sense for both teams, and the lack of teams with cap space this summer means that there is a low chance that DeRozan leaves San Antonio in free agency with the Spurs getting nothing in return, a sign-and-trade could still be challenging for DeRozan and the Spurs to work out.

In July, both sides may realize that a deal keeping DeRozan in San Antonio, at least for a couple of seasons, makes sense for everyone involved.