Last night in Miami, the San Antonio Spurs showed why they’ve been one of the top teams in the NBA consistently over the last 15 years: depth. 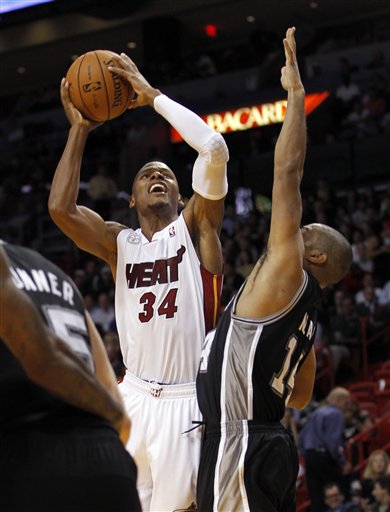 Even without Tim Duncan, Manu Ginobili, Tony Parker, Danny Green, Kawhi Leonard and Stephen Jackson, the Spurs were able to hang with the defending champs for all four quarters.

The Spurs have set a mold that all NBA teams should strive for with chemistry, coaching and depth. They’ve been able to keep their core of Tim, Tony and Manu together for what seems like forever and found a strong cast of role players to fill in the rest. The guys we saw last night aren’t the most talented guys in the NBA, but they play hard and they play well together, which showed when they stuck around and almost pulled out a game they had no business being in in the first place.

The Spurs’ success has not gone unnoticed around the league. They’ve definitely drawn the eye of Heat head coach Erik Spoelstra.

“They have a game that withstands the test of time,” Spoelstra said. “They really are timeless. They’ve played together so long, they are seamless. They do a great job of moving the ball, play to their strengths. … Their pace may have changed; they are fast. They spread the floor, move you around.”

The Heat have the advantage of being a desired destination for veterans looking to win a ring (or add a few more rings), so they get a lot of stars willing to take on a lesser role to play with LeBron and company. Where do you think that idea came from?

“We have asked some guys to check their egos, but the Spurs have been doing it for decades,” Spoelstra said. “It is the blueprint. Just not many players are willing to do it. Manu Ginobili is a Hall of Famer and we all know he should have been a starter his entire career but was willing to come off the bench.”

So the Spurs have set the mold, will any team ever really be able to fill it like they have?