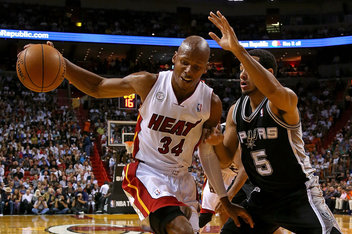 Just when you thought all the "restgate" drama was behind the San Antonio Spurs comes news today that a Miami Heat fan is suing the Spurs because coach Gregg Popovich elected to send several of the teams players home prior to their November 29 game against the Heat.

Popovich sent Tim Duncan, Tony Parker, Manu Ginobili and Danny Green home prior to the game to rest his players early in the season during a grueling road trip that had them playing their fourth game and five days.

For most fans, an apology and public tongue-lashing of the Spurs from David Stern and then a $250,000 fine would have been enough, especially considering it took a late Ray Allen three-pointer for the Heat to get past a mostly reserve Spurs unit.

Darren Rovell of ESPN is reporting that attorney Larry McGuinness has filed a class action lawsuit against the Spurs in Miami-Dade County.

On Monday, Larry McGuinness filed a class action suit in Miami-Dade County, stating that the team's head coach, Gregg Popovich, "intentionally and surrepticiously" sent their best players home without the knowledge of the league, the team and the fans attending the Nov. 29 game against the Heat. McGuinness contends that he, as well as other fans, "suffered economic damages" as a result of paying a premium price for a ticket that shouldn't cost more.

In Rovell's report, he notes that ticket prices are often higher against better teams, which hardly seems like the Spurs fault. McGuinness also compared paying a premium for the Spurs-Heat game to paying for a premium steak and getting a substandard cut instead.

"It was like going to Morton's Steakhouse and paying $63 for porterhouse and they bring out cube steak," said McGuinness, who said he bought his ticket on the resale market. "That's exactly what happened here."

I've bought my share of tickets for sporting events and while I can agree that it can be a letdown to get hyped up over a game with a better opponent and not have their top players playing, I'd argue that Heat fans that paid for the Spurs game got to see a good game and got their money's worth regardless if some of the Spurs' most popular players were in Miami or an a Southwest Airlines flight home.

It's not up to me to decide whether or not what Popovich did violates state deceptive and fair trade practices law, but if the Spurs had beat the Heat on November 29, I wonder if there would be a lawsuit at all.

That cube steak is looking awfully good next to the pile of 80/20 ground beef that would have signified the Heat losing to a Spurs team lead by reserves.