This young 2012-2013 season started off with a familiar note: Manu Ginobili being injured. His first game of the season came against the Utah 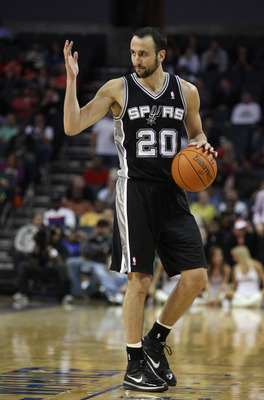 Jazz on November third after tweaking his back during practice. The guy plays tough, even against his teammates in situations that aren't really competitive. With injuries, come slow starts especially for a guy who needs to continually keep playing to stay in a groove. For most fans, that might not be a good enough excuse. He's been plagued by injuries for most of his NBA career and those injuries may have cost the Spurs a championship (notably 2006 and 2008). One thing is for sure: you can't easily replace a guy who plays with heart and passion, even to a fault because he puts his body on the line for every game. In an article for the Alamo City Beat, the subject was brought up: Should the San Antonio Spurs go a different route from Manu or does he have one last run in him?

The subject is really easy to bring up and I've had many discussions with people talking about the same topic. Interestingly enough, most of them have the same solution when it comes to replacing Ginobili with another player: nothing. Fans can try to bring up possible players to replace Manu's production, but where they match or exceed Ginobili in one category, they greatly lack in the others. Anyone remember when the Spurs traded for “the most athletic small forward since Sean Elliott” in Richard Jefferson to replace the dependence they had on Ginobili in case of injury? Jefferson matched or exceeded Ginobili's points per game stat before he was traded to the Spurs, but we all know how much he struggled while wearing the silver and black.
Is Ginobili replaceable? Absolutely, anyone is. The problem isn't replacing Manu Ginobili the person or player on the team, it's replacing his skills and intangibles with a single player.
Ginobili brings in qualities that superstars are made of, the only problem is his health. If the Spurs were to trade Ginobili or let him go as a free agent, there isn't a player who can duplicate his role for this team. With him being a free agent in the upcoming offseason and the Spurs having some wiggle room in their salary situations, bringing Manu back will always be a plus for the team and he won't ask for anything close to the $14 million he's earning this season. Here's a truth for Spurs fans: if the team is relying heavily on Ginobili, they don't have a chance to compete for an NBA championship. He's too injured to rely upon as a necessity and don't think the Spurs didn't know that.
That is why the Richard Jefferson debacle took place, because they knew Manu's health was an issue. The difference between then and now is that this current Spurs team is loaded with versatile players who play well on both sides of the court. It's no longer a Spurs team who has a Big 3 and role players who just shoot and defend. Kawhi Leonard and Danny Green can duplicate the some of the same offense Manu brings while playing the same or better defense. Boris Diaw can make plays that the Spurs haven't had in a long time with a strong passing play and good man defense in the big position. Oh yeah, there's also a guy that goes by the nickname of “Captain Jack” in Stephen Jackson who brings in Manu-like intangibles that the Spurs haven't had in a long time. The problem or question shouldn't be Manu's health because this team has the personnel to make up for some of his play with its depth. If he gets injured, this team has enough depth to take the burden that Manu carries off the bench. “El Contusion” should leave this team when he feels he needs to because anything he brings on the court is a positive that no one can fully reproduce.