It looked like the San Antonio Spurs were going to come away with a hard fought win last night in Utah, or at least have a chance in overtime, but Mo 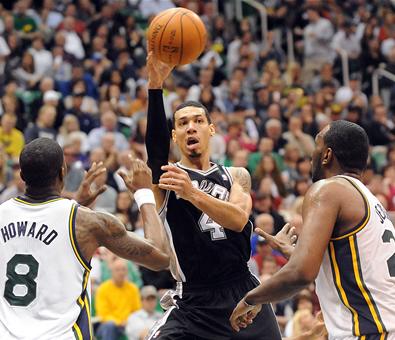 Williams had other plans.

Williams sank the game winning three-pointer at the buzzer, right in the face of Danny Green, to give the Jazz a 99-96 win.

Last night after the game, Green tweeted out an apology, taking blame for the loss.

'I' didn't make the plays we needed down the stretch on the defensive end of the floor…I'll take blame, let me teammates down…

I think Green is probably the only person that thinks he should take the blame for that last play. If you watch the video (Spurs fans, I understand if you can’t), you can clearly see Green is up on Williams, right where he should be. As Williams rises up for the shot, Green is able to get a hand in his face and is only a few inches away from getting a fingertip on the ball.

Unfortunately for Green, this is just a case of good defense getting beat by better offense. Williams made a great shot, that’s all there is to it. The Jazz didn’t need the three to win, so Green had to respect that Williams could drive by and take a shorter shot. If Green had been up in Williams’ face any more, he would have been at a huge risk for a foul or Williams could have blown by him.

I don’t blame Green for what happened, it looks like his teammates don’t either. Patty Mills tweeted a reply to Green, trying to keep his spirits up.

Green and the Spurs will have to move on quickly from the game against the Jazz. They play tonight in Portland.