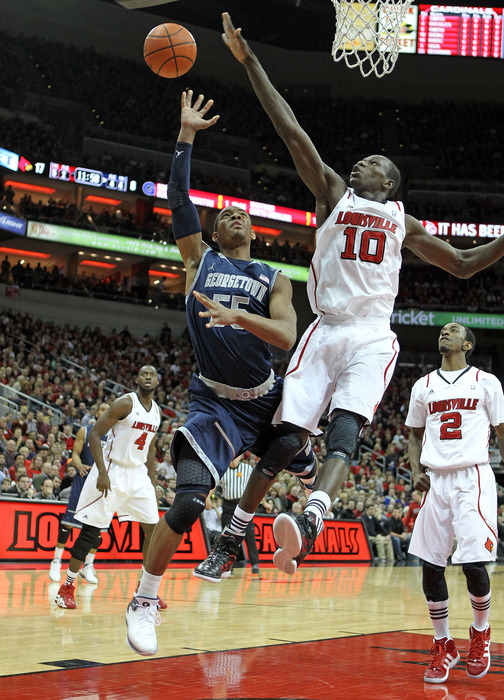 A lot is going to happen between now and June's NBA Draft.  The San Antonio Spurs are likely to make a run deep in to playoffs.  They might even win the NBA title. Even if that happens there will still be improvements to be made, particularly on the interior, though the trio of Tim Duncan, Tiago Splitter and Boris Diaw has proved to be a much better interior line than last season.

Shot blocking and rebounding aren't particularly strong parts of the Spurs' defense when Duncan is off the court.  Luckily, this June's draft may have one option in particular that could strengthen two weak points on the Spurs' roster.

I covered Dieng before, but since then he's been playing some of the best basketball of his life.  Dieng, who is originally from the Senegal, came to Louisville as a project his freshman year, showed some strides his sophomore year and has gotten even better this year despite suffering an early season wrist injury.

Currently, Dieng is second in the Big East in both rebounds and blocked shots and his scoring has gone up for the third consecutive season.  He finished the regular season on a really strong note, putting up 20 points, 11 rebounds and five blocks against Notre Dame in a game that helped the Cardinals secure a share of the Big East regular season championship.  He also recently scored a career high 23 points in a win over Seton Hall.

You're probably asking why a guy who defends and rebounds like Dieng would even be available at the back end of the draft.  The reason is his age.  Dieng turned 23 in January, which makes him old compared to most of the rest of the draft.  At 23, he's two years older than most of the rest of his class and most prospects don't stay till their junior years anymore.  In theory, this means he isn't likely to develop much more.  That matters a lot when you're drafting in the lottery, a little through the rest of the first round and less than that in the second round.

A similar situation occurred in 2009 with Taj Gibson.  Gibson was drafted 26th by the Chicago Bulls after finishing his junior year at USC, averaging 14 points, nine rebounds and three blocks a game.  If Gibson had been a freshman or sophomore putting up those numbers he probably would've been a lottery pick and even if he were a 21 year old junior he would've been a top 20 pick.  However, Gibson turned 24 days before the draft.  Not a lot of upside.  Now there isn't a team in the league that wouldn't want him as their third big guy and he'd probably start on half the teams in the league.

Dieng could be that guy as well.  Right now, he's number 30 on Jonathan Givony or DraftExpress' top 100 and number 36 on Chad Ford of ESPN's board.  If he has a big Big East tournament or a big NCAA tournament, he'll probably jump into the 20's but teams drafting any higher than that will still be hesitant to take him.  The Spurs, however, should not hesitate to take him if he's available.  They don't need a superstar and while the Spurs have done it before, finding a superstar at the end of the first round is really tough.  Dieng would be a smart, developed player that could contribute right away.

Jeff Withey, C, Kansas – A lot of things I just said about Dieng apply to Withey.  He's bigger than Dieng but less athletic.  Still, he's an elite level shot blocker (averaging four blocks a game), a good rebounder, but doesn't defend the pick and roll like Dieng can.  Still, he's going to be a great pick late in the first round for whoever gets him.  Think Robin Lopez with less silly hair and no twin.

Andre Roberson, F, Colorado – Up and down March for the Wagner High School product.  First he scored a career high 24 points in a win over Stanford.  A week later he was diagnosed with mononucleosis and is out indefinitely.  He'll likely miss the Pac-12 tournament and might miss the NCAA tournament.  It'll be curious to see if he declares for the draft on such anti-climatic terms.

A month from now is when things will really start to take shape because we'll start hearing names of underclassmen declaring for the draft and we'll also have more detailed reports on players from Europe.  As always, let us know who you'd like to see the Spurs target in this June's draft.